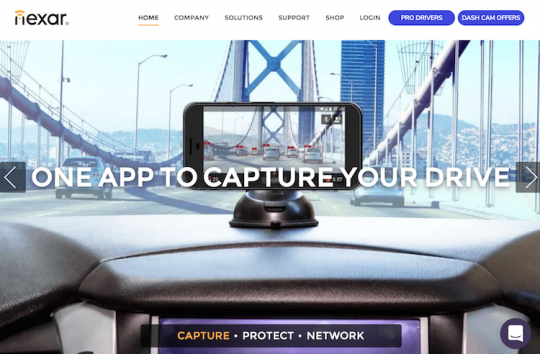 Nationwide (Columbus, Ohio) reports that a pilot with Nexar (Tel Aviv), a computer-vision telematics startup,  has demonstrated improvements in commercial drivers’ safety-related driving habits. Nexar is one of several investments resulting from Nationwide’s June 2018 announcement to deploy more than $100 million of venture capital toward customer-centric solutions. Nexar is a telematics startup focused on building the world’s largest safe-driving network. The video-recording technology provides vehicle-to-vehicle communication that connects directly to a dashcam app and monitors driving behavior.

The pilot program, undertaken in New York City, used Nexar dashcams in the fleet vehicles of a Nationwide commercial lines client, HASC Center, a non-profit agency that provides services—including transportation services—for children with special needs. During the 16-week program, HASC Center drivers demonstrated significantly safer driving habits by the end of the program, showing a substantial decrease in the key driving behaviors identified as most likely to lead to accidents.

“This partnership with Nexar and the pilot program with HASC Center demonstrates our commitment to innovation by leveraging technology to better protect policyholders, their employees and their clients,” comments Tony Fenton, VP, commercial product development, Nationwide. “The future of safer roads is going to rely on our ability to analyze driving habits and share those insights with drivers so they can take action to become safer. Our investment in Nexar and related telematics solutions drives that conversation. We’re thrilled to see the results so far, and we’re committed to increasing our research capabilities.”

During the pilot, Nexar installed its dash-cam technology with the HASC Center in 20 fleet vehicles. Over the course of 16 weeks, the dashcams monitored over 3,000 hours of fleet vehicle operation and more than 20,000 miles of mostly city travel.

“We were excited to be included in this pilot program,” comments Avi Sacks, fleet manager, HASC Center. “At the time Nationwide approached us with the opportunity, we were actively looking for a dashcam solution. Our goal was to have access to data about our drivers’ behaviors so we could confidently ensure the safety of the children we transport around the city on a daily basis.

Sacks says that HASC is now committed to making dashcams standard in all of the organization’s vehicles because the benefits the company experienced through the Nationwide/Nexar pilot program dramatically improved safe-driving behaviors.

In June, Nationwide also announced its plans to open a new innovation center in the Arena District of Columbus near its corporate headquarters. The firm expects the new center to open in 2019

Nationwide says its innovation efforts are directed toward helping members:

“As Nationwide nears its centennial in 2026, we’re doubling down on our innovation efforts to prepare for the next 100 years,” comments Scott Sanchez, chief innovation officer, Nationwide. “Investing in Nexar is one example of how Nationwide is helping solve consumers’ protection needs in new and digital ways.”

Nexar Closes $30M Series B Round for V2V Network Technology