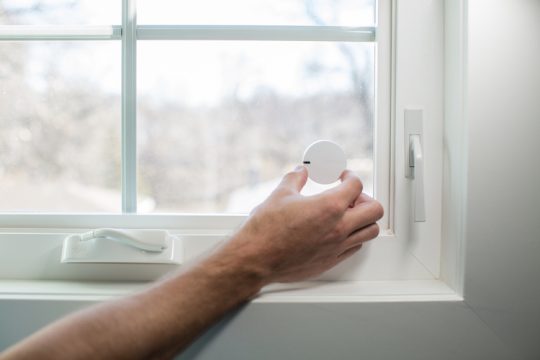 Nationwide (Columbus, Ohio) has launched a smart home program providing a variety alerts, such as leaky or frozen water pipes, to customers away from home. The insurer is partnering with Notion (Denver) to use its smart home monitoring technology to provide this added layer of protection. If customers opt into the program, they can purchase the Notion Wi-Fi enabled smart home kit at a discounted rate and save on their homeowners insurance policy. In a statement about the new coverage, Nationwide characterizes Notion’s smart home monitoring system as easy-to-use and packing multiple capabilities into each sensor, which monitors the home for opening doors and windows, the sound of smoke/CO2 alarms and water leaks, all from a personal device.

“The main reason we chose to partner with Notion was that each sensor is multifunction, allowing policyholders to customize a solution to their home,” comments Teresa Scharn, AVP, Product Development, Nationwide. “We also liked that the kit is easy for customers to implement. Finally Notion has been a great partner to develop and learn with, and grow in the space.”

“We’re thrilled to be selected as the IoT partner for Nationwide to launch their smart home technology program to its customers,” comments Brett Jurgens, CEO and Co-Founder of Notion. “As the insurance industry is quickly moving towards an IoT-oriented, lower-risk future, an insurer’s ability to offer smart home connectivity with policy incentives will become one of its biggest advantages.” Nationwide’s Scharn, whose Product Development team which has created other Nationwide IoT-based programs, including its SmartRide and SmartMiles telematics-powered usage-based insurance (UBI) programs, and a rideshare insurance program undertaken in partnership with Slice Labs (New York), sees the new smart home offering as a prelude to related offerings.

“I would say this is certainly the beginning of a program that will rapidly evolve,” comments Scharn. “There’s a lot of consumer need in this space that we can enable with a smart home solution. People want to protect their homes, they want to know what devices they need and where to put them. They want to know what to do in the event of a claim/loss and they want a recommendation for a plumber. Those are solutions I think we can provide to our customer to not only protect their home but also to give them additional peace of mind.”