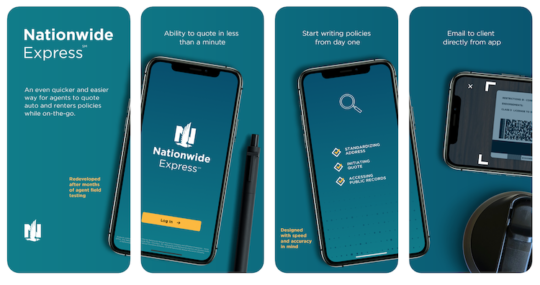 Nationwide (Columbus, Ohio) has added a mobile app to its Nationwide Express technology platform that lets agents quote multi-line policies in as little as two minutes, enabling them to tailor coverages, bind and process payment and trailing documents in a fraction of the time it historically has taken in the industry. The new app allows agents to scan a driver’s license to complete an auto quote in as little as 60 seconds, according to the insurer. Agents can also add a homeowners or renter’s policy with just one click. The insurer characterizes the app as putting the power to generate quotes on-the-go into the palm of an agent’s hand.

Nationwide reports that its Agent Authority research shows that nearly a third of consumers (32%) affirmed that the length of time it takes to receive an insurance quote is a “challenge.” The insurer says the Nationwide Express mobile app was designed to help agents work faster, from wherever it is convenient for them.

“It’s as easy as scanning a driver’s license with a mobile device or tablet,” a Nationwide statement says. “Once the quote is stored, agents can choose to bind the policy in Nationwide Express, complete it later when they’re back in an office, or send it directly to customers and let them complete the bind process when it’s most convenient, giving the agent the power to do business the way that makes sense for them and their customers.”