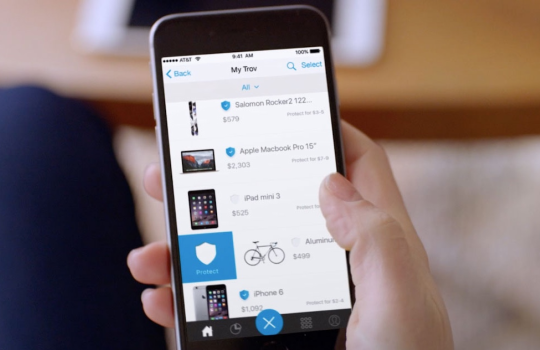 Munich Re (Munich), one of the world’s most important reinsurers, has announced that it will underwrite Trov’s (Danville, Calif.) on-demand insurance across the United States in 2017. A joint statement says that the reinsurer intends to provide underwriting capital and insurance licensing for Trov for all 50 states. Munich Re announced in July that its Digital Partners business unit would partner with Slice Labs, creator of a platform for selling on-demand insurance for the sharing economy.

Trov presents a nice example of an outside-in insurance play, according to Matthew Josefowicz, CEO, Novarica (Boston).“It started with the idea that people have a need to insure against very specific, comparatively small risks, and then figured out a way to deliver against that need,” he comments.“MunichRe’s move here, like its previous move to support non-traditional products written by Slice, shows an ability to adapt to supporting innovative plays that don’t fit normal models.” Trov’s on-demand insurance lets consumers instantly turn insurance on or off for individual items as they feel the need to protect them, using the Trov app on their smartphones. The app is built on Trov’s cloud-based insurance platform, which features micro-duration policies, algorithmic pricing, integrated billing, and intelligent bot-assisted claims.

“Partnering with Munich Re brings its immense capability and strong balance sheet together with Trov’s innovative technology platform, so that millions of Americans can be empowered to protect their things, mobility, and lives, in ways never before possible,” comments Scott Walchek, CEO, Trov.

Andy Rear, Head of Munich Re’s global Digital Partners business unit, comments: “Digitalization is changing the face of the insurance industry, and our partnership with Trov is a perfect example of the innovative propositions we are developing with digital insurance start-ups and digital verticals. Trov is creating a new way for consumers to interact with insurers, which ultimately benefits not only consumers, but our industry for the long haul.”

Trov’s on-demand insurance will be phased into all 50 states beginning in 2017, allowing users to protect single items, such as electronics, photography, and sports equipment, the joint statement asserts. The Trov mobile app—essentially an inventory application currently without on-demand insurance—is currently available for free in the US on iOS and Android in the US, and empowers users to easily add and back up their possessions by snapping a photo of an item/receipt or searching the product database. More than 10 million items have been added to people’s Trovs globally, with a total value of over US$10 billion.

Trov on-demand insurance will launch in the U.K., in partnership with AXA, before the end of 2016. Trov first launched on-demand insurance in Australia in May of 2016, in partnership with leading insurer Suncorp. It has been most popular with the 18-34 year old audience, which the joint statement suggests gives an early indication of the audience that will engage with the product in the U.S.

The real importance of Munich Re’s announcement of its partnership with Trov is that it demonstrates the willingness of some very large, established, and important insurers to bring InsurTech products to market, according to Donald Light, Director in Celent’s (Boston) North America Property/Casualty Insurance Practice. “It is very unlikely that Munich Re thinks this partnership will bring any material boost to its top or bottom lines,” Light qualifies. “Rather this is a very small tuition payment to Insurtech U to be in the ‘future of insurance’ graduate seminar.”