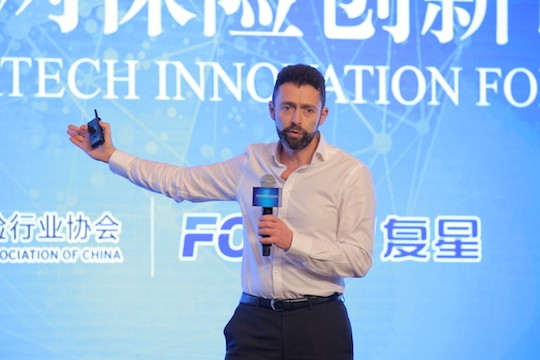 (Steven Mendel, CEO of Bought By Many, whose new products are underwritten by a Munich Re subsidiary.)

The analysts and researchers promised us that insurance disruption would come first on the distribution side, and we haven’t been disappointed. Among the chief prerequisites of success in digital commerce are being where the customer is, providing a superior level of service, and anticipating needs that the old paradigm did not serve. These are all met by Bought By Many, a London-based broker that says it used search and social media insights to build 300 groups for more than 270,000 individuals to meet their insurance needs in a highly customized way—while negotiating discounts for them.

Having acted as a broker since its founding in 2012, Bought By Many today launched its own insurance products. The first ones are for dog and cat owners, but having had a brief conversation with the company today, we suspect that they’ll expand into some of the other lines they help customers with, which today include home, gadget, health, business, sports and leisure insurance. And why not? The essence of their offering is access to insurance that’s a better fit, at a better price—which, while it works well for pet insurance can be applied to just about anything.

We were not surprised to learn that Bought By Many has not become a carrier and is, in effect, selling white-labeled products. We were very interested to learn that the company underwriting this new distribution expert’s products is Munich Re. Well, or more precisely Great Lakes, a wholly owned entity of Munich Re based in the U.K.

From Distribution to IoT

Why is that so interesting? Because some of the most interesting distribution plays are backed by Munich Re. It’s true of Trov, which provides instant insurance on individual property items whose risk profile changes—such as a musician’s instrument taken out of the house to a gig. It’s true of Slice, which sells on-demand insurance products to participants in the sharing economy, helping them transition between their personal and commercial identity on a real-time basis. Munich Re is also investing in Slice.

Following distribution, the next great wave of disruption will probably be focused on the Internet of Things. Perhaps our favorite company to watch in this space is Hartford Steam Boiler (HSB), which is on a mission to repeat the role it played in addressing the emerging risks of the original industrial revolution, but this time for the Digital Revolution. HSB was acquired in 2009—by Munich Re.