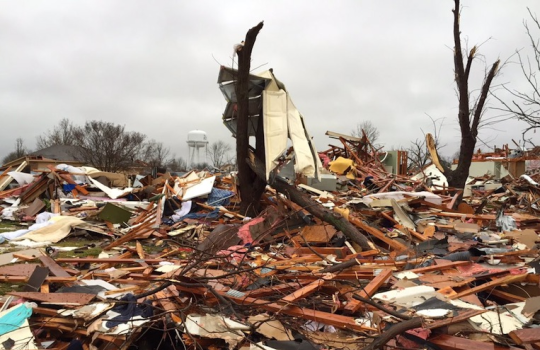 Catastrophe modeling firm AIR Worldwide (Boston) reports that at least nine tornadoes struck North Texas on Saturday, Dec. 26, most of them concentrated in the vicinity of Dallas, the fourth ost populous metropolitan area in the United States. According to local officials, as many as 1,450 homes may have been damaged or destroyed. The tornadoes were part of a vast storm system that impacted an area from New Mexico to Michigan and Georgia over the Christmas holiday weekend,delivering tornadoes, flash floods, blizzards, hail and freezing rain. Multiple news sources report at least 43 deaths as a result of the storms.

“A cold front passed through North Texas on December 26, where it entered a region of very warm and moist air, triggering the development of severe thunderstorms, including isolated tornadoes,” comments Scott Stransky, manager and principal scientist, AIR Worldwide. “After the tornadoes had developed the temperature in Dallas fell from 72 to 56 degrees.”

The most serious damage was caused by a tornado that hit Rowlett in Dallas and Rockwall counties with EF-3 winds gusting between 136 and 165 mph, according to AIR. It then struck nearby Garland, a northeastern suburb of Dallas, as an EF-4 tornado, which typically has wind gusts between 166 and 200 mph. The line of damage caused by this tornado—the deadliest to hit the Dallas area since an EF-4 tornado hit Garland on May 9, 1927—is about 13 miles long. An additional EF-2 tornado struck near Copeville in Collin County and Blue Ridge, Ovilla/Glenn Heights, Hubbard, Ennis, Eustace, Sulphur Springs, Emory, and Sunnyvale were also hit by tornadoes. The Governor of Texas has declared Collin, Dallas, Ellis, and Rockwall counties disaster areas.

Too Early for Damage/Loss Estimates

Damage surveys are still ongoing, and it is too soon to have a complete account of the damage caused, AIR notes. Initial reports indicate that 600 structures were damaged in Garland, most of them single-family homes, and that a similar number may have been damaged in Rowlett. An RV park near Sunnyvale in Dallas County is reported to have sustained damage to 63 structures, and 116 structures are known to have been damaged in Glenn Heights in Dallas and Ellis counties, 29 of them seriously. In addition to damaged structures, there was extensive damage to vehicles, power lines, and trees.

“Tornadoes are characterized by a central vortex, a rapidly rotating column of air around a region of low pressure,” AIR’s Stransky observes. “The central vortex leads to greater upwards vertical forces on structural components and higher suction pressures. The width of a tornado wind field is significantly smaller than that of a hurricane. Different building types vary in their response to increasing tornado winds.”

A direct hit by a tornado usually causes catastrophic damage to residential buildings and major damage to engineered structures, according to Stransky. “Roofs, wall covers, and windows are often the first part of a building to be damaged by tornado winds,” he continues. “The high suction pressure induced by tornadoes causes uplifting of roof systems which leads to progressive damage to the rest of the building. Tornado winds can also peel off unsecured slates, roll metal roofs, and damage windward overhangs and eaves. In addition, tornado-borne flying debris could also cause breaching of windows and create internal pressurization, which exacerbate the uplifting of roof system. Failure of the roof system weakens lateral support of walls and compromises the main wind resisting frames, thus contributing to their collapse as well.”

The tornado activity on December 26 was accurately forecast by the Storm Prediction Center and appropriate warnings were issued, AIR notes. All but one of the reported tornadoes occurred in the enhanced risk area indicated. Tornadoes can appear at any time of the year, but they occur less frequently in winter, according to AIR. On the Gulf Coast, peak “tornado season” is during the spring. From 1950–2012, only 12 December days have seen EF-4 or EF-5 tornadoes. Tornadoes can also happen at any time of the day or night, but most occur between4 p.m. and 9 p.m. The Garland Tornado struck just prior to 7 p.m.

Despite the devastating events of the Christmas weekend, the tornado count for 2015 is well below average, AIR’s Stransky notes. “According to the NWS, an average of about 1,200-1300 tornadoes hit the U.S. yearly. The Storm Prediction Center notes that 2015 has seen only 1,056 through Sunday, December 27. But as demonstrated by the Garland tornado—and previously by the Moore tornado in 2013)—all it takes is a single powerful tornado hitting a populated area to cause extreme damage,” he concludes.