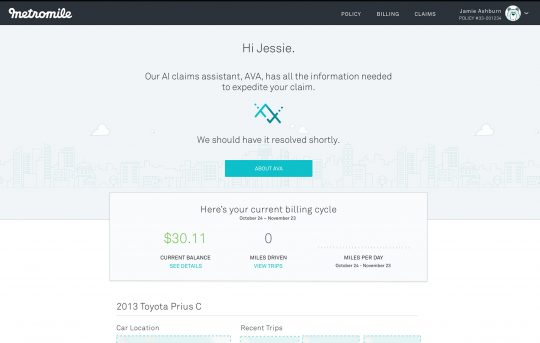 Metromile, the San Francisco-based pay-per-mile pioneer, has launched a new automated system powered by an AI-based “smart claims assistant.” The application, known as AVA verifies claims in seconds and quickly resolves them, according to the insurer. At launch, AVA will only be available for certain claim types, with expanded eligibility and advanced automated features rolling out in the coming months. Metromile reports that AVA will also soon be able to issue instant payments and assist with scheduling repairs. “The future of insurance is frictionless and fairly priced, which is all enabled by smart use of data,” comments Dan Preston, CEO, Metromile. “AVA enables us to automate traditional claims handling tasks, allowing our adjusters to do what they do best, service our customers.”

Utilizing Metromile Pulse sensor data, AVA can reconstruct the accident scene and instantly determine if claim details are accurate, according to a Metromile statement. If verified, the claim can be approved within seconds and AVA notifies the customer of the expedited claim. Claims that require further review are escalated to the insurer’s claims team, which Metromile says is equipped with internally developed software that helps them investigate and close the claim quickly and fairly.

“We strive to provide a fair, accurate and seamless claims experience,” adds Preston. “Instead of relying on traditionally complex processes to handle customers’ claims, our machine learning platform removes the friction associated with getting your car back as soon as possible.” Depending on the method chosen by customers, payment can be in their bank account within days of filing, according to Metromile. The insurer says that it has a team of data scientists utilizing machine learning capabilities to continually teach AVA new skills to further expedite the claims process.

Metromile’s new claims capabilities flow from its Sept. 2016 series D funding round of  $192 million and the acquisition of Mosaic Insurance, which has enabled the company to underwrite policies and transform its entire claims process. In addition, the company has done the following, per Metromile’s description:

Metromile claims that its pay-per-mile car insurance saves low-mileage drivers $500 on average each year. The carrier says that its smart driving app and in-car telematics device give customers visibility into their cars’ general health and usage, as well as pinpoint its exact location via the vehicle locator, and help customers avoid parking tickets via the app’s street sweeping alerts in select cities where the service is available. Metromile’s pay-per-mile insurance is currently available in seven states, including Calif., Ill., N.J., Ore., Pa., Va., and Wash. Metromile aims to provide pay-per-mile insurance nationwide.

Metromile Gets $191.5M in Funding, Will Acquire Insurer