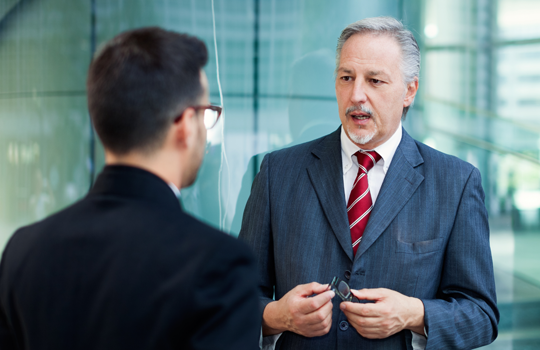 (Editor’s Note: This article is Part III of a three-part series. Click on the following links for Part I and Part II. Photo credit: Minerva Studio)

Dan: Hey, Rik, come on in. I’ve been looking forward to this. We’ve all heard from Neddie [CEO] how important social media is going to be for us here at Humongous.

Nik: Yeah, I keep hearing that but I don’t feel like I’m really gaining any traction. In fact…

Dan: Yeah, I know — heard you’ve met with Ed and Cindy. Let me offer condolences right off the bat.

Dan: Look, Nik, I’ve known both of them for years, I know their attitudes and their ways of operating and I’m sure they read you the Riot Act right off the bat. Correct?

Nik: Yeah, I guess you could say that.

Dan: And actually I just got off the phone with Cindy — God, she has the foulest mouth. Guess she feels she has to talk like that to keep up with the big boys, but I’ll be darned if I know anyone else who throws around expletives like her…

Nik: I know, she’s actually kind of scary. But I think with her it’s just her nature rather than some kind of strategy.

Dan: Maybe, who knows, who cares? But, first, how did it go with Ed?

Nik: Well, not much better, actually. I showed him several ideas, just as ideas, as directionally where I wanted to go, and he was totally dismissive of everything, kills everything but a box of kittens, for God’s sake.

Dan: Woo, yeah, heard about that — but I think you got payback big time with that photoshopped Persian cat. Friend of mine in PR told me Ed nearly had a cat himself, claimed you’d smuggled in an Iranian.

Nik: Well, can’t say I am all that proud of myself, but I was just so…

Dan: Understood. But look at it from Ed’s point of view. His job is to get Neddie into the Journal and the Times, and if he does that a couple times a year he’s golden, so long as there’s no negative publicity. And Neddie’s been pretty clear as well that it’s his job to protect and promote the Brand. So Ed has to protect Neddie.

Nik: I get that, I do, but doesn’t he realize that there can be plenty of other Brand protectors and promoters besides just him, like the employees, the agents, in social media and elsewhere on the Web?

Dan: I think he gets that theoretically, but… Okay, you also have to look at it this way: Ed reports through Corp Comm, and Corp Comm reports to Neddie. Corp Comm is where Neddie gets his jollies. You think Neddie enjoys going over financial reports? Nope, but he loves putting out the Annual Report and the annual financial Press Release — done by Ed’s staff — and so he loves Ed. And even more than that, where he really gets his jollies is with advertising. This is where he gets to define the Brand. And while this is not, strictly speaking, Ed’s, he’s a part of it and it’s all Corp Comm. Corp Comm is Neddie’s playground, Nik, and the only thing Ed can see in you, and your playground, is conflict.

Nik: Wow. I guess I just have a very different view of these things.

Dan: No doubt, and I daresay a more progressive and healthier view, but…

Nik: Jeesh, okay, so what can you tell me about Cindy? How can I deal with her?

Dan: Never met anyone who could… Look, in many respects she’s in the same kind of situation as Ed, but only worse: Ed can produce some occasional good publicity but what’s good Compliance publicity? There is only one kind of Compliance publicity, and it’s always bad, it’s fines, it’s breaking regulations, it’s Humongous doing bad things…

Nik: Sure, I get that, Dan, but isn’t it pretty clear by now that FINRA has really taken the lead on this and made it clear that they want companies and agents and agencies, to actively participate in social? Okay, so all the old rules apply but the new rules are just adaptations of the old, right?

Dan: Nik, I’m not an expert here but I’ve read some of the stuff and, yeah, I think that, generally, your interpretation is correct.

Dan: Remember, Nik: Fines, bad publicity… Let me put it this way: You know what a Venn diagram is, right?

Nik: So I take it you really can’t help me, then.