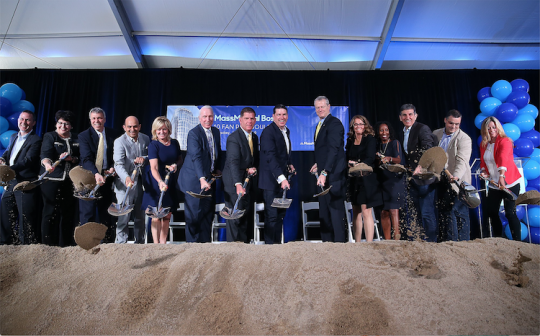 (See details of photo below body of story below. Photo source: MassMutual.)

Massachusetts Mutual Life Insurance Company (MassMutual; Springfield, Mass.) was joined by Massachusetts Governor Charlie Baker, Boston Mayor Martin J. Walsh and The Fallon Company as it broke ground on Tuesday, June 4, 2019 on the company’s new commercial building in Boston’s Seaport district at 10 Fan Pier Boulevard. The insurer characterized the groundbreaking as an integral milestone in support of MassMutual’s multi-year plan to expand in its home state of Massachusetts.

Once completed, the new 17-story, 310,000-square-foot building will house approximately 1,000 MassMutual employees. MassMutual reports that it is also renewing its commitment to Springfield, the city of its founding, by adding 1,500 jobs to its headquarters by the end of 2021. The company says that realignment of its geographical footprint will enable it to grow and thrive in Massachusetts, realizing the benefits of metropolitan and suburban locations on both sides of the state.

“Massachusetts is home to one of the nation’s leading innovation economies and we are excited to welcome MassMutual’s expansion into Eastern Massachusetts, while also celebrating their continued investment in Springfield and Western Massachusetts,” commented Governor Baker. “MassMutual has been an economic driver in the Commonwealth for over 160 years, employing Massachusetts residents and investing in the talent of the next generation. We look forward to MassMutual’s continued success locally and across the country.”

Hub for Digital and Technology Initiatives

MassMutual says that its Boston location will serve as a hub for its digital and technology initiatives and give MassMutual greater access to the city’s financial markets, workforce, and thriving startup community.

“I’m pleased to welcome MassMutual to Boston’s Seaport District as they continue to expand in our city and state,” said Mayor Walsh. “With hundreds of new jobs, MassMutual will add to the mix of dynamic, growing businesses in Boston’s Seaport, supporting our talented workforce and contributing to our local economy in Boston.” Last year, MassMutual became a founding partner of the MassChallenge FinTech Accelerator, which is headquartered in Boston and supports startups in the financial technology industry. As a continuation of its support for the program and to foster an ecosystem of innovation across the state, MassMutual announced during the groundbreaking celebration that the company will be giving prime office space in its new building to MassChallenge.

“Today marks a pivotal milestone for MassMutual as we take tangible steps to create a better company for future generations of policyowners, customers and employees,” said Roger Crandall, MassMutual Chairman, President and CEO. “Expanding on both ends of the state – from Springfield to Boston – allows us to tap into the incredible talent pool and network of higher education institutions that Massachusetts offers. Our new location at Fan Pier gives us the opportunity to immerse ourselves in one of America’s leading centers for innovation. As we break ground on our new building, we look forward to playing an important role in the future of the Commonwealth of Massachusetts, our home since our founding in 1851.”

Designed by Boston-based Elkus Manfredi Architects, and developed by The Fallon Company, 10 Fan Pier Boulevard has been designed add to the aesthetic of the Fan Pier neighborhood with what a MassMutual statement calls a distinctive curvaceous façade composed of faceted glass. The multi-story commercial tower will feature tiered terrace levels on the 13th floor and rooftop, with sweeping views of Boston’s harbor. Additionally, a 5,900-square-foot outdoor public plaza at the base of the building, designed by landscape architect Richard Burck Associates, will include an elegant water feature and enhance the streetscape.

Fan Pier is a joint venture of The Fallon Company and Barings, a MassMutual asset management affiliate. The $4 billion mixed-use neighborhood encompasses three million square feet of commercial and residential real estate, public space, civic and cultural space, with direct access to the Boston Harbor waterfront and a multitude of transportation options. 10 Fan Pier Boulevard will be the final commercial tower at Fan Pier and is expected to be completed in late 2021.