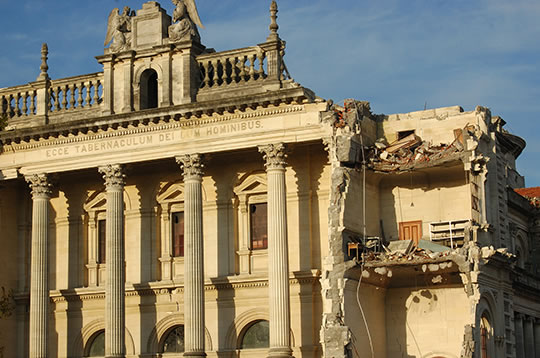 The Christchurch earthquake was a human catastrophe for New Zealanders generally, and a major claims event for the island nation’s insurers. But it was those things and more for Lumley Broker, the commercial insurance division of Auckland-based P&C carrier Lumley General Insurance Ltd. (part of Wesfarmers Group; about US$170 million in recorded 2012 insurance earnings). The February 2011 seismic event coincided with Lumley Broker’s policy administration system replacement initiative.

The severity of the quake – which resulted in 185 fatalities – presented challenges for Lumley in terms of not only claims volume but also in policy administration. “We had to cease writing business in certain areas while maintaining coverage for our existing customers during possible aftershocks,” comments Paul Geden, business support manager, Lumley Broker.

The quake struck during phase two of a modernization effort with roots in a 2006 pilot of Guidewire Software’s ClaimCenter claims application. After going live with ClaimCenter in 2008, Lumley selected the vendor’s InsuranceSuite as its target platform, and specifically the PolicyCenter policy administration system within its PARS (Policy Administration Replacement System) initiative to replace and decommission 25-year-old legacy systems.

Preparing for the Future

“The future for us was being able to connect electronically with our distribution partners, and we couldn’t easily do that with our legacy systems,” comments Geden. “Brokers use a range of systems, and we wanted them to be able to use their own systems, but link directly with us.”

In addition to the requirement for direct connection with distributors, the biggest part of the business case for replacement was data quality, according to Geden. “We wanted more data in order to be able underwrite more accurately,” he says.

While one of the lessons of the ClaimCenter project was that Lumley needed a significant change management program, planning for the PARS initiative didn’t anticipate just how much additional data would be needed. “We learned that we should have done more data analysis up front,” Geden acknowledges.

Even more significantly, the PARS team hadn’t foreseen the difficulties of altering the way underwriting associates worked – underwriting more accurately required asking applicants more questions. “We thought we had included our people enough in our evaluations, but it wasn’t even close,” Geden recalls. “We found that what they said in workshops didn’t necessarily reflect how they actually worked.”

From a user point of view, the legacy system worked fast – in part because of the limited amount of information gathered within the legacy process. Collecting more data actually slowed down the process in ways that associates resisted. “They didn’t quite understand that they had to change,” observes Geden. “They understood that there was a new process, but they thought they could continue doing things the way they had always done them.”

The project’s business sponsor’s involvement was vital to keeping the project on track. “We learned that change management isn’t something you do for the business, it’s something the business does for itself,” Geden says. “Until we got people in the business driving change it wasn’t really working. After that, we really gathered momentum.”

Lumley rolled out PolicyCenter with five lines of business during its initial rollout in 2011. The insurer was deep into development work for the second phase – rollout of remaining lines of business – when the earthquake struck. The February 22, 2011 event was the second and far more serious of two quakes. The first, on September 4, 2010, was also a significant claims event. “There was a time when our board of directors questioned whether we should continue,” Geden recollects. “We had a difficult decision to make.”

Lumley went ahead with the initiative, and the improvements made to its change management efforts resulted in two successful rollouts. The latter, in 2012, was followed by an overlapping legacy decommissioning project which concluded successfully on July 27, 2013. “You can’t realize all the benefits of a legacy replacement project until you switch off the legacy system,” Geden remarks.

While the decommissioning contributed efficiency gains, the most important result of the PARS project overall was the goal of more effectively connecting with distributors, Geden emphasizes. “Proof of our success was a recent deal we made with a distribution partner,” he relates. “The basis of that deal was that they were able to connect with our system and submit all their business electronically.”

If there’s an overarching lesson that Geden draws from the project, it is about the change management challenge associated with modernization. “In the event, the technology was the simpler part,” he notes. “The greater difficulty was embedding the business process.”