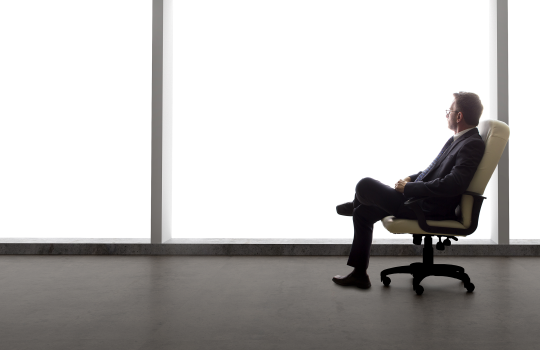 An insurance CEO invited me for coffee in the company canteen. Walking into the canteen, I was acutely aware of being stared at and that this was solely down to my companion. He was resigned to these reactions and the experience started a conversation about how cut off it can feel at the top of the organization.

He explained how people treat him differently given he was CEO. He was keenly aware that he received invitations to the events like Ascot or Wimbledon only because of the position he was in. It was the position being invited—not him. Extending this, he was also aware that people were not always honest with him and he was certain his jokes weren’t as funny as responses might suggest.

In a position of significant power and influence, he knows will not always get the truth he needs, or the trust he wants from people around him. As the saying goes, it can be pretty lonely at the top.

This is true for all senior positions. Having seniority is something many aspire to, but it tends to change all the relationships around us. In particular, it can create an honesty and trust vacuum. Like the Emperor and his new clothes, few people are willing to speak up when you have the power over their future.

Not Getting the Full Story

In another example, a CEO told me of her open-door policy. In her worldview, she’s easy-going, and open to hearing everything and anything. Yet she knows she’s not getting the full story of what is going on the company and she doesn’t know how to close that blind spot.

We are misguided to expect full and complete honesty and trust from those below us in the organization. We cannot overestimate the impact of the hierarchy. In our own worldview, we may see ourselves as amenable, open-minded people. But staff see your influence over their bonus and their career prospects in the firm.

Those new to the position of leadership have vivid recent experiences of being one of the workers. It is often incomprehensible that the very people you were shared coffee with last week in the company kitchen now see you in a very different light. For those who have been in senior positions for a while, it is often a source of great frustration.

How do we make sure that we aren’t the Emperor in the new clothes? There are a few ways to mitigate against this trust and honesty vacuum in a senior role:

Accept the reality. In coaching senior people, I’ve seen resignation, annoyance, and sadness over the sense of loneliness at the top. Those who are resigned to the reality appear best placed to cope as they then move to put in place support structures for themselves.

Triage. Get two or three perspectives from people around you in the organization. Then triage and find a middle point that makes sense to you. As simple as it sounds, I frequently see senior people influenced by the last person they spoke to.

Reach out to others with similar roles. This can be in your industry or different industries. You are able to get a fresh perspective on your issues and challenges from others not affected by the trust/power vacuum.

Get a mentor or coach. Both trusted advisor roles can offer insight and perspective unconstrained by any vested interested in your company.

Whatever combination of tools and techniques you use put in place a strategy to mitigate the trust vacuum at the top.