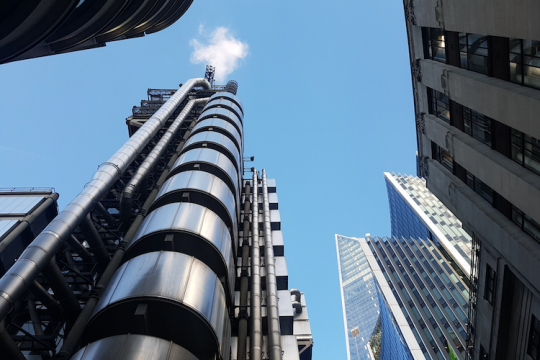 This week Lloyd’s of London announced a “bold new strategy for its future.” Interesting in itself as a stage in the history of one of the insurance industry’s most important and historic organizations, the strategy announcement also illustrates the macro trends that are disrupting the industry. The announcement served as a preview for a prospectus titled “The Future at Lloyd’s,” which outlines six ideas that illustrate how the organization and the London market more broadly can respond to current challenges and opportunities presented by emerging technology-driven changes in the way the insurance business is undertaken:

In the strategy announcement, Lloyd’s CEO John Neal asserted the organizations “unique attributes” of being able to access unparalleled underwriting expertise, financial security and market access all in one place and calling them more relevant than ever. However, he conceded, “a dynamic risk environment combined with rapid advancements in technology have fundamentally changed the world. Lloyd’s is changing too, driven by a desire to provide the best (re)insurance products and services available anywhere.”

“We will succeed by harnessing the entrepreneurial and innovative spirit that is at the heart of Lloyd’s,” Neal continued. “Together we have a tremendous opportunity to reimagine Lloyd’s and build a marketplace that is future focused, highly responsive to the changing and diverse needs of our global customers, with a culture of inclusivity and innovation.”

Sheila Cameron, CEO of the Lloyd’s Market Association, likened the organization as one of a number of ships in an “insurance flotilla,” with “The Future at Lloyd’s” demonstrating John Neal’s commitment to put Lloyd’s at the front. “It offers an exciting view into how our shared marketplace can evolve and we are excited to work together with Lloyd’s on building out this braver future for the ultimate benefit of our customers,” she commented.

These and other comments in the announcement seemed imbued as much with anxiety as forward-looking optimism about Lloyd’s future. While Neal could honestly claim that the strategy was driven by a desire to provide the best products and services, that desire is also conditioned by the fact that other entities have been cutting into Lloyd’s business.

The Challenges of the Digital Era

Lloyd’s has found itself at a crossroads because technology has enabled more efficient ways of undertaking insurance transactions digitally, from anywhere in the world, according to Mitch Wein, Senior VP, Research & Consulting, Novarica (Boston).

“The six points of Lloyd’s new strategy are a manifestation of a macro trend in insurance, a pivot in the insurance industry,” Wein says. “They are now doing what other large insurance organizations have had to do—look at digital, data and core [systems].”

Lloyd’s is faced with the virtualization of business around the world, the maturation of local and regional markets, and the ability to more reliably price increasingly more granular risk segments owing to the proliferation of relevant data, according to Wein. Through the creation of platforms of both more and less complex types of risk, Lloyd’s aims to leverage artificial intelligence (AI), machine learning, predictive analytics and big data to provide a competitive way to provide a more highly automated—and thus competitive—way of placing risk, Wein relates.

Through its Syndicate-in-a-Box, the organization provides a more streamlined way to introduce innovative products, according to Wein. “Product introduction has historically been complex at Lloyd’s because it required a great deal of programming an integration,” he explains. “Syndicate-in-a-box speeds both placement and introduction of new products.

Growing placement of business in emerging local markets has caused a slow contraction of Lloyd’s business, according to Craig Beattie, a U.K.-based Senior Analyst for Celent (Boston). Lloyd’s new strategy is a question of survival, comments Craig Beattie. “Lloyd’s share of the market has is shrinking slowly, so it would take a long time to die, but they need to reverse that by becoming relevant to digital markets” he says.

The nature of Lloyd’s relationship to the broader entity of the London market results in less flexibility than some of the major global insurers who have so far done a better job of embedding themselves in local and regional markets, according to Beattie. But Lloyd’s has also struggled with idiosyncratic technological and procedural friction collectively referred to as “Londonisms.”

“Lloyd’s continues to be very good at innovating around risk and being the last insurer of choice—its market expertise is second to none,” Beattie says. “The problem continues to be on the distribution side, one of integration.”

The Future of Lloyd’s no doubt represents “the culmination of months of engagement with stakeholders across the market and around the world,” as Bruce Carnegie-Brown, Chairman of Lloyd’s, said in the organization’s announcement. However, it also looks like the culmination of previous efforts, especially the recent Target Operating Model (TOM) initiative. TOM accomplished some important advances, notably its Placing Platform Limited (PPL) and Delegated Authority Business initiatives. “If you look at TOM in the journey Lloyd’s has been on last three to five years, this is a natural culmination more clearly defining where the organization will be positioning itself in the future,” says Beattie. However, TOM was in other respects a kind of wish-list repository. In as much as the new strategy’s initiatives map to those of TOM—for example PPL resembling the newly proposed Risk Exchange—it raises the concern that it could simply be the latest overly ambitious, likely-to-fail program.

“There’s been a question of whether this could be a case of ‘too little too late,’ but these are certainly steps in the right direction, and there’s certainly a case for optimism,” Beattie comments.

In the vein of optimism, the new strategic plan aims at opportunities not merely to remain relevant but for becoming competitive in areas Lloyd’s is not known for excelling in, according to Beattie.

He affirms that The Lloyd’s Risk Exchange could provide an important missing piece that has been missing: a route for insuring smaller, less complex risk that Lloyd’s could compete for. “To make it work, Lloyd’s needs to adopt local standards. Small, mid-sized commercial could be a target for Lloyd’s,” he says. “I think Lloyd’s could compete in price and expertise, analytics. If they choose that direction, and this should give them an opportunity to do that.”

With regard to the strategy more broadly, Lloyd’s needs to engage the senior members of the market and drive them to action before they retire, Beattie advises. He notes that Lloyd’s also has a natural advantage in London being a major hub for InsurTech and needs to do a better job of engaging with that community.

The Age of Engagement: Understanding the Insurance Industry’s Digital Future