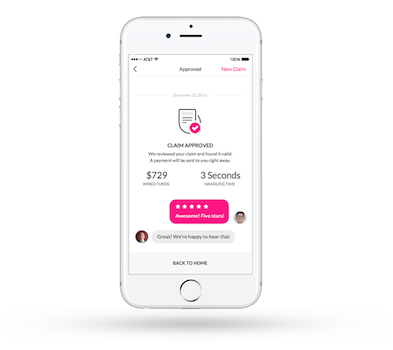 Call it a stunt, if you will, but Lemonade has made a striking demonstration of what automation and data transparency can achieve in the realm of insurance: a claim paid in just three seconds without paperwork. Lemonade cites the figure of 30-45 days as the required timeframe within which insurers must pay claims in most states.

The startup insurer, which started doing business in September in New York State and in December announced filings in 46 states and the District of Columbia, reports the following: At seven seconds past 5:47pm on December 23, 2016, Brandon Pham, a Lemonade customer, hit “Submit” on a claim for a $979 Canada Goose Langford Parka.  By ten seconds past the minute, A.I. Jim, Lemonade’s claims bot, had reviewed the claim, cross referenced it with the policy, ran 18 anti-fraud algorithms on it, approved the claim, sent wiring instructions to the bank, and informed Brandon the claim was closed.

“Since no international standards exist for the payment of insurance claims, the Guinness Book of World Records was unable to enter Lemonade as the World Record Holder,” comments Daniel Schreiber, CEO and cofounder, Lemonade. “Yet from all we can gather, in the 3,000-year history of insurance nothing like this has ever happened in 3 seconds. So we’re claiming the title. The number to beat is now 3 seconds, and we hope others will rise to the challenge.”

Lemonade’s business model is to provide competitive rates for renters and homeowners insurance and conduct business in an automated fashion, relying on rules-based systems and artificial intelligence. Consumers can buy and service their insurance policies on any device through the Lemonade.com website or the Lemonade app. The firm was granted B Corporation status for its “Giveback” program by which Lemonade, after taking a flat fee for coverage, gives unclaimed money to causes chosen by policyholders. The program is designed to address moral hazards traditionally faced by insurers in the pricing of risks, and by policyholders tempted to file exaggerated or otherwise fraudulent claims.

“I was shocked by how easy the process has been with Lemonade,” comments Brandon Pharm, who submitted the claim that took three seconds to resolve, according to Lemonade. “I signed up for Lemonade because it was no frills, the most affordable option, and took no more than two minutes on my couch. I try to avoid making claims but the process with Lemonade was so simple. I already assumed there was no way that I’d recover my losses: other insurers either pile paperwork or deduct tons of charges that I don’t understand. But this time was different. I signed a honesty pledge, answered a few questions, and Lemonade reimbursed me in a matter of seconds! Their service is amazing and I am so happy that I signed up!”

“This is a great example of leading from desired customer experience and backing into the process,” comments Matthew Josefowicz, CEO of research and advisory firm Novarica (Boston).“It’s not unusual for insurers to auto-pay small property claims like this without human review, but it is unusual for them to have the developed processes and technology to do so instantly and thus create the kind of customer delight that Lemonade seems to be focused on. I’d be curious to know whether the same process could be applied to a 5 or 6 figure liability claim. That would be a game changer.” Lemonade’s three-second claim illustrates the rapid maturation of AI and suggests what is possible for the next generation of claims processing, according to Deb Smallwood, founding partner of research and advisor firm Strategy Meets Action (SMA, Boston). “When insurers couple AI with new data sources, predictive models and align to specific products, magic can happen,” Smallwood says. “But what is more important and relevant in this success story is the culture of innovation and open business models of Lemonade that led to a rethinking of the claims process.”

Lemonade is positioned to create new roles in claims to manage this new AI model on the back end, and to adjust how it works as needed, Smallwood adds. “This is a very exciting development, and we will continue to see many more proof points throughout the year of Next-Gen claims and other areas of the insurance business model,” she says.

Editor’s Note: Deb Smallwood’s comments were added after initial publication of the article.