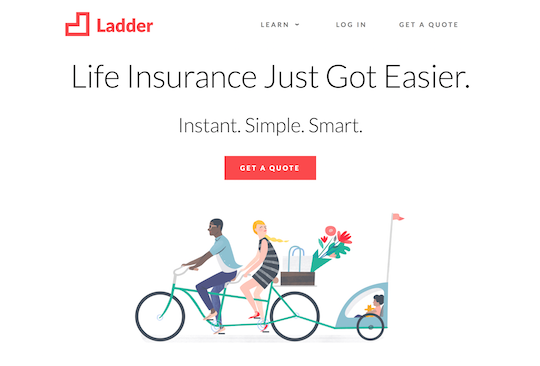 Ladder, a startup insurer aiming at what it calls instant, simple and smart life insurance announced that it has raised $30M in Series B financing, led by RRE Ventures, with participation from Thomvest Ventures, as well as Ladder’s existing investors: Canaan Partners, Lightspeed Venture Partners and Nyca Partners.

“Ladder’s full stack approach sets them up to deliver breakthrough innovation in this space,” comments Stuart Ellman, co-founder and general partner of RRE Ventures. “We’re excited to work alongside this great team as they build the next generation life insurance offering.”

Having built proprietary technology from the ground up, Ladder says it is able to quickly iterate on its product to introduce new features that streamline the experience for consumers. Founded in 2015, Ladder launched what it calls its fully-digital life insurance solution in California on January 10, 2017.

With this latest round of funding, Ladder will continue to develop its platform capabilities and expand its marketing initiatives nationwide. The company recently announced it will also make its digital life insurance offering available to partners via the Ladder API. The company raised $14 million in an initial funding round closed in 2016.

“One year ago today, we set out to reinvent life insurance, and I could not be more proud of what our team has accomplished,” comments Jamie Hale, Ladder’s CEO and co-founder. “That said, we’re just getting started. We will continue to lead innovation in life insurance so more people can get the coverage they want and need.”