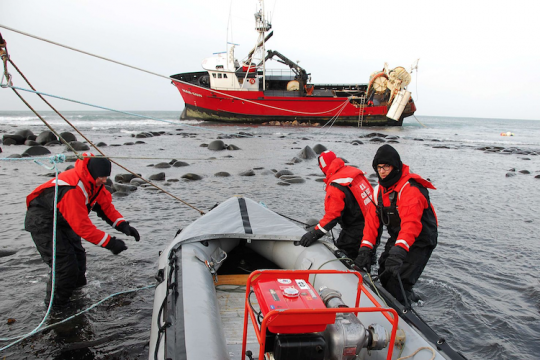 The global economy is expanding as never before. Manufactured products are moving from East to West, agricultural exports from North America go to feeding a hungry world, while oil from the Middle East fuels it all. The world’s freighters are working overtime to deliver the goods, and with more ships at sea, there are more mishaps, and consequently, more insurance claims. Ships are subject to all sorts of dangers—collisions, storms, even sea-jacking. Insurance covers claims resulting from collisions and other maritime mishaps, but shippers would certainly prefer to ensure that their cargo gets to port without incident. The alternative means a loss of money, manpower and reputation. Shippers aren’t the only ones interested in keeping their cargo and crew safe; the insurance companies that cover them in the event of an incident seek to limit their liability as well. Thus, any technology that can reduce risk for both shippers and insurers is likely to be welcomed with open arms. Among those technologies are artificial intelligence (AI) and machine learning-based systems. AI can help crews know where to steer clear of, whether the danger they face is a potential ship collision or bad weather.

The cost of insurance has indeed become a major concern in the shipping business in recent years. While clubs have been able to offset increased calls, the costs of compensation have come uncomfortably close to the amount available for compensation, leaving clubs no choice but to raise fees. As claims rise, traditional marine insurance premiums are sure to increase in cost, as well. As those costs get handed off down the line, eventually coming out of the pockets of consumers, keeping marine and P&I insurance costs down is best for everyone.

Ships are, of course, equipped with numerous systems to avoid sea-specific dangers, such as radar, to help them avoid other ships, oncoming storms, etc. In addition, data is gathered from a variety of sources, including GPS, AIS and ARPA. And yet, armed with all that data, ships still face multiple dangers, and shippers, multiple losses. For example, there are approximately 3,000 marine collisions each year, costing firms billions USD a year. Does that mean that radar, etc. are ineffective in protecting ships?

Not at all. Those protective systems are not to blame. According to statistics, human error accounts for 75 percent of marine liability losses, mostly due to collisions, but also due to accidental groundings, failing to avoid large storms, etc. Radar, GPS and the other systems can supply data to crews. However, if it’s not acted upon, misinterpreted or ignored, that data won’t prevent a ship from getting in trouble. That doesn’t mean the data collection is of no value; it means that the data has to be utilized in a manner that will provide value for crews, and help them avoid problems, whether due to human error or other causes. AI can help utilize the data to provide information about what ships can expect to encounter, which will allow crews to avoid situations that could cause losses.

Predicting the Likelihood of Collision

AI systems can quickly crunch data coming from all sources and make predictions on upcoming events. Based on the route of the ship and data on routes of other ships in the vicinity, taking into account wind speed, direction and currents, the system would be able to predict the likelihood of a collision—enabling crews to change their routes and avoid the danger. The same would apply to any other incident a ship is likely to encounter, and most importantly, it would provide specific reports and warnings, giving them a full picture of what to expect and enabling crews to take immediate action, rather than the disjointed pieces of data that safety systems would provide.

AI systems are able to make those predictions using algorithms that take into account all data and scenarios—and constantly improve by using machine learning to further hone their predictive skills. Data from seagoing encounters on the ship, and many others, enables the system to become more accurate in its predictions, allowing crews to take action more quickly.

The data collected by the system has value outside of preventing losses; it can be used to make shipping more efficient. Analyzed data can provide valuable information about preferred routes, tide behavior, environmental conditions, and more, which can be used to help shippers determine fuel needs and faster routes.

Artificial intelligence isn’t just for lab research; it can have an important role in keeping ships safe, and shippers—along with insurance companies—from losing time, assets and money. With more ships plying the seas guided by AI, the number of ocean-going incidents will plummet, and insurance costs are sure to follow.