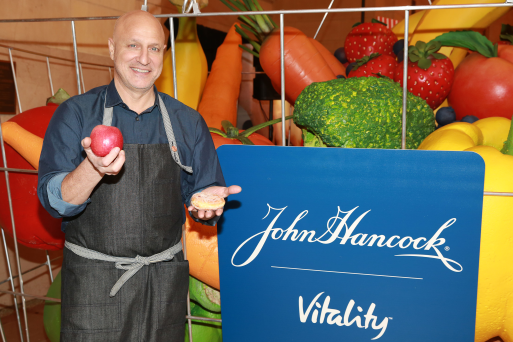 John Hancock (Boston) has expanded the John Hancock Vitality solution by adding the HealthyFood program, which enables policyholders to earn rewards including real-time discounts and/or cash-back up to $600 a year on their grocery bills, and program points that lead to savings on their annual premiums up to 15 percent. The insurer has enlisted celebrity chef Tom Colicchio to publicize the program and make the case for healthier food choices. The John Hancock Vitality program, launched in 2015, involves a partnership with wellness program management provider Vitality (Chicago), and provides policyholders with free Fitbit wearable devices that help people track their physical activities. The program works with almost all wearable devices such as Garmin and Jawbone, and smartphone applications like Apple Health. Policyholders log their activities with online and automated tools that are integrated with personal health technology.

The Vitality HealthyFood component takes the program adds a new dimension to the program by rewarding policyholders for purchasing healthy food at any of 16,000 participating stores nationwide, including Walmart and other major grocery chains in the NutriSavings network — a complete list of included grocery stores can be viewed athttp://www.nutrisavings.com/all-retailers/ .  Policyholders also gain nutritional information and guidance that will help them adopt healthier eating habits through a new collaboration with the Friedman School of Nutrition Science and Policy at Tufts University.

“Over the past year, we’ve seen our customers embrace the John Hancock Vitality program,” comments Michael Doughty, president, John Hancock Insurance. “In fact, our policyholders are taking an average of 9,205 steps per day, compared to the average U.S. adult, who takes an average of 5,900 daily steps.”

However, adds Doughty, fitness without good nutrition is not nearly as impactful on an individual’s health as when the two are combined. “Now, with the addition of the HealthyFood program, policyholders can be rewarded for both walking a few more steps and making healthy food choices to improve their overall health,” he comments. Poor diet contributes significantly to mortality, being attributed to out of four deaths (26%) in the U.S., or nearly 700,000 deaths each year, according to a 2013 study. More than two-thirds of American adults age 20 and older are overweight or obese, as are 32 percent of children, according to the American Heart Association. Adopting a healthy diet and active lifestyle can help many Americans take control of their health and prevent heart disease and other chronic conditions.

The insurer enlisted the help of celebrity and restaurateur Tom Colicchio, who made an appearance yesterday at an interactive John Hancock Vitality Marketplace at New York City’s Grand Central Terminal. (John Hancock’s promotional video featuring Colicchio can be reached here.)

“I have always been an advocate for easy ways to eat healthier, and I’m excited that now you can be rewarded for those little changes—beyond just nutritional value—through the HealthyFood program,” Colicchio remarked at the event. “It’s really important as we think about all the ways, both physically and financially, to motivate ourselves and our families to live long and healthy lives.”