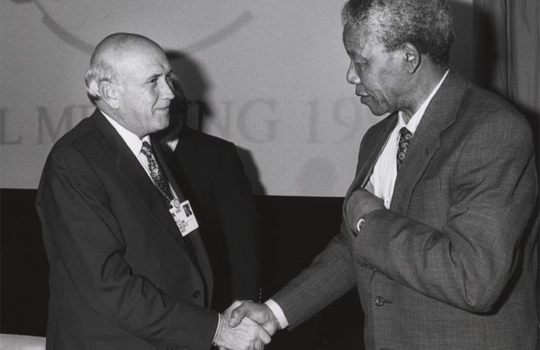 Like so many of us, I was affected by the news of the death of Nelson Mandela. I grew up in South Africa, and lived through the peaceful transition of that troubled country to a fledgling democracy. It’s been said so many times but it’s worth restating – Mandela’s role in healing the heart of South Africa was pivotal. He was a courageous leader with a clear vision for what his country needed.

It is his humanity that stands out for me. His capacity for forgiveness allowed space for the healing process. If Mandela could forgive his captors for 27 years of jail, then who were we not to forgive each other? His unquestioning inclusiveness in creating the new South Africa challenged entrenched ways of working. His (and others) willingness to create a space to process the painful past – not to deny it – through the Truth and Reconciliation commission was such an important part of the healing process. His leadership leaves a lasting impression on so many of us.

There are other examples of inspiring public leadership. And it feels somehow different to the leadership within organizations. Or is it? What makes for a great leader in a company?

In a survey of friends, I asked folk to name anyone they’ve worked with that was in their mind a great leader. A pattern emerged. Friends could name someone as “getting the results that are needed” but would then would add a caveat like “but he’s a total narcissist with no people skills”.  They could not name any great leaders.

As this unscientific survey points to, this is an intriguing paradox – we yearn for leaders who alongside achieving results are human as well. As my one friend so eloquently put it: “A great leader is someone you want to work for regardless of how the rest of the company performs.”

The lack of inspiring leadership shows up in engagement levels at work – and we have alarming levels of disengaged staff. Gallup’s annual survey on employee engagement reports 70% of working Americans as disengaged.

Offices can be dispiriting places where people show up merely to get a pay check. For many of us, we’ve come to accept that we need to work to survive and have long given up the notion that we might have an option to work at something we love.

I recently ran a workshop for a professional services division of a Tier 1 consulting firm. The workshop formed part of an agenda for a team away day. I walked into a stuffy room of 25 people who had worked since lunch without a break. To me, they looked like the life had gone from them – they were robots performing the necessary tasks to keep their job. It would have been comic material for the TV program, The Office – had it not been about real people.  And the greatest irony is that the HR department of this company is well aware of this challenge – and the impact on its bottom line, and yet is powerless to make a change. This is an outcome of effective leadership over great leadership.

Let’s be in no doubt about the fact that an engaged workforce is something to aspire to. The Gallup report states: “Those in the top 25% of Gallup’s Q12 Client Database have significantly higher productivity, profitability, and customer ratings, less turnover and absenteeism, and fewer safety incidents than those in the bottom 25%.”

What’s missing in the professional services company I mentioned, and in many other firms is great leadership. Not effective leadership – many companies have that covered. Through effective leadership, the company makes year of year growth projections and keeps stakeholders happy. With great leadership, we achieve growth targets and we get happier customers, lower staff turnover and fewer safety incidents. We have staff who choose to come to work because they are engaged and inspired by the leadership.

It’s time we start demanding great leadership in our organizations. What I want is for us to work for leaders who achieve results and retain their humanity.  To have leaders who inspire us. To have a conversation with my friends where we debate at length about the long list of great leaders we know.