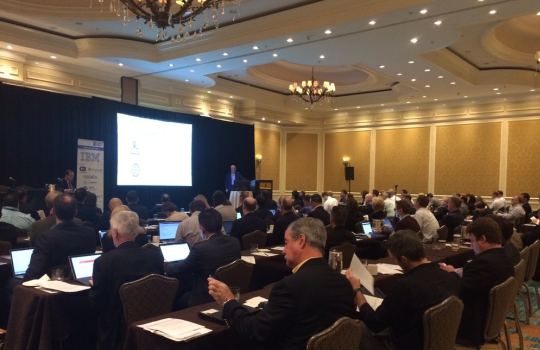 If solving the seemingly intractable problem of personal lines product commoditization weren’t enough, speakers during the course of the event suggested that the IoT provides the means of introducing frequent—and more gratifying—touchpoints in the insurer/policyholder relationship and making relevant in consumers’ daily lives. Several speakers also suggested that due to the sensor-and-data technology that characterizes the IoT, it also has the power accord a dynamic quality to risks, reducing their severity or frequency through monitoring risks and modifying policyholder behavior that can affect the risk.

Keynote speaker Kathy-Ann Hutson, insurance analytics leader, IBM (Armonk, N.Y.) reported that five million new things will be connected within the IoT daily during 2016, and by the end of the year the total of connected devices will be 6.4 billion. By 2020, the total will be 20.8 billion.

“The IoT is a means to an end, so what are the ends—what are we trying to do, for example in the insurance industry?” Hutson queried. The answer, she continued, was to “unlock revenue from existing products, inspire new practices or processes, change or create new business models or strategies.”

As an emerging disruptor, the IoT will be a $30 billion industry by 2020 and be valued at more than $100 billion by 2050, according to Hutson. “The question for insurers is, ‘Will you be a distruptor or will you be disrupted?’,” she added.

The adapt-or-go-extinct theme was reiterated by several speakers. Technology application areas such as smart home, collision avoidance and autonomous cars have already begun to change the way risk operates, said Bill Hartnett, head of innovation at insurance standards organization ACORD (Pearl River, N.Y.). “The world is being derisked by the IoT,” he said. “Insurers must act or lose.”

The IoT is ushering in a new economic age, with $14.4 trillion annual global economic potential across all sectors, noted speaker Meghan Thomas, chief underwriting officer, AIG Global Casualty (New York). Among IoT related capabilities that can enable smarter decision are drones, which are fast growing in number. Today there are about 40,000 in operation, and that number will jump to 160,000 by 2050, according to Thomas. “Insurers can innovate with the IoT or just disappear,” Thomas commented.

Among the greatest challenges faced by insurers seeking to adopt the IoT is building the capability to manage the large amounts of data that it generates.

“It all comes back to the data,” said speaker Mark Breading, partner at research and advisory firm SMA (Boston). Insurers will need to adopt a common architecture to manage the data flows, requesting information, receiving it, reacting and responding.”

The IoT assumes nothing less than a complete reorientation toward data from the reactive to the proactive, Breading elaborated. “It is vital to think about managing data in this environment in a way that isn’t point-to-point and doesn’t result in building yet more silos,” he said. “We need to change the paradigm—we’ve been an industry that looks at historical data. We now have all this real time information, so we must go from reactive to proactive.”

Speaker Joe Wodark, product manager at Verisk (Jersey City, N.J.) noted that research firm IDC expects the generation of 40,000 exabytes of data through the IoT. Each insurer will have to identify the proper data scale at which to operate, identify data providers and develop an “encompassing big data strategy,” he advised. Insurers will also have to navigate the pace of consumer adoption of the IoT and their degree of willingness to share data. “The value proposition must be strong,” Wodark said. “The data must be secure and there must be clarity about what customer data is being used and why.” Perhaps surprisingly, in the case of John Hancock’s Vitality program, which involves policyholders using wearable devices to earn rewards and discounts, data sharing was less an issue than usability, according to speaker Brooks Tingle, senior VP, Marketing & Strategy, John Hancock. “People cared far less about privacy, giving up personal data, as they cared about ease of use,” he said. “Don’t get me wrong—they don’t want a breach—but they care about the quality of interaction.”

Tingle said that the audience might be skeptical of his talk’s claim that the IoT could transform life insurance, but that was in fact the case. “In the past we’ve stood back and simply hoped that policyholders live a long life but never played a role in promoting it,” he said. “What an opportunity the IoT presents to fundamentally change that.”

Tingle described a “partnership” forged within the Vitality program through intervention, incentives and rewards. “It creates a lot of value and we share that back with the customer,” he said.

The life insurance industry has been overdue for innovation, Tingle stressed. “Life insurance is a record low and has become quite irrelevant,” he said. “And if we can’t meet consumer expectations, we become irrelevant.”

The IoT provides a unique opportunity for life insurers to reengage insurers and invert the conversation about the dominant theme behind a life insurance conversation—death. Traditionally one of the reasons consumers are understandably not excited about life insurance is because the best case scenario of their relationship with the insurer involves them being dead, Tingle quipped. With the IoT the relationship becomes one of a collaboration toward ongoing health and well-being.

That is possible because, whereas historically communicable diseases accounted for half of the causes of death, advances in medical science mean that today 50 percent of the causes of death are related to lifestyle choices about exercise, nutrition and whether one smokes. Because of how interaction based on wearable device data, “I can argue that IoT is even more relevant for life insurance,” Tingle said.