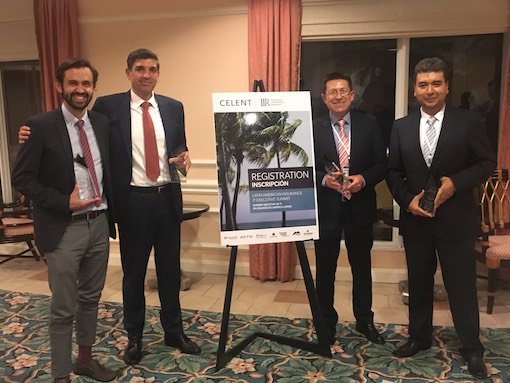 In a special edition of Insurance Innovation Reporter’s newsletter today, we have the pleasure of introducing our readers to the winners of IIR’s Four Stars Award, which debuts this year. The Award recognizes outstanding insurance IT professionals in each of four major regions of Latin America: Mexico, the Caribbean and Central America, the Andes, and the Southern Cone of South America.

The Winners are as follows:

IIR conducted the selection process for the Four Stars Awards in partnership with Celent, with invaluable collaboration and leadership from Juan Mazzini, the firm’s Senior Analyst specializing in the Latin America region. Special thanks also to Celent Analyst Luis Chipana and Fabio Sarrico, who heads business development in the region and participated in various aspects of the selection process and tasks associated with the Latin American Insurance IT Executive Summit, undertaken through a partnership between Insurance Innovation Reporter and Celent.

Thanks also to the Four Stars Awards judges, who evaluated each of the candidates and chose the winners:

The profiles of the winners serve as a window into the vibrant insurance/technology scene in Latin America, which demonstrates a rapidly innovating industry as a global phenomenon, exemplifies how emerging markets are rapidly evolving, and provides examples of individuals who would be outstanding executives in any market across the globe. Our honorees also show something of what’s special about this particular region of our hemisphere, and we ourselves feel honored to report on their outstanding achievements.