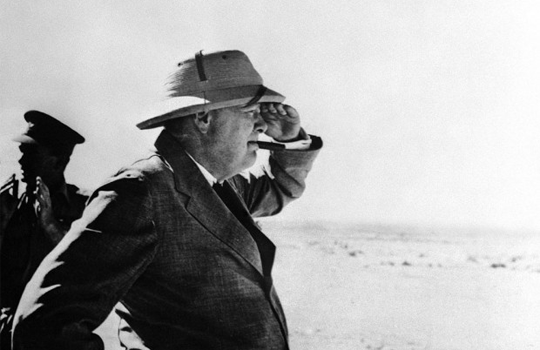 (Winston Churchill appears to look to future victories after El Alamein which, perhaps like Nationwide’s first PolicyCenter implementation milestone, was not the end, nor even the beginning of the end.)

Guidewire (San Mateo, Calif.) announced this week that Nationwide (Columbus, Ohio), with help from consulting partner EY, has successfully implemented PolicyCenter in pilot production for the insurer’s personal umbrella line of business in one state, supporting two out of three of the line’s sales channels. The news marks the first production announcement since Nationwide went public with its selection of PolicyCenter for personal lines policy admin systems consolidation in early 2013. That announcement was recognized at the time as of potentially profound significance for the insurance industry as the first Tier 1 carrier to adopt a modern, rules-based package system as its core system consolidation target. By the time Nationwide selected PolicyCenter it shared with other major carriers, including The Hartford and CNA, adopted Guidewire’s ClaimCenter system. Moving from claims to the core policy administration platform was a breakthrough, and the successful deployment for the first line of business is also an important milestone, suggests Matthew Josefowicz, president and CEO of Boston-based research and advisory firm Novarica.

Jim Korcykoski, CIO, Personal Lines & Direct, Nationwide Insurance, reports that the carrier’s initial PolicyCenter implementation has gone very smoothly and has been greeted with overwhelmingly positive user feedback. “We attribute our successes to-date to a combination of lessons learned from our ClaimCenter implementations, a very strong and dedicated internal team, great partners, and the Guidewire technology,” he comments. “This implementation is a significant step in our journey to simplify our products and processes onto a common set of platforms.  This simplification gives us the speed-to-market, agility, and cost advantage necessary to enable our business strategy.” Nationwide’s deployment of PolicyCenter for personal umbrella shows that a third-party software package can fit into the context of a Tier 1 carrier’s business model, affirms Karen Furtado, a partner with SMA, a Boston-based research and advisor firm. However, questions remain about the extent and depth of customization required to successfully deploy the pilot, she cautions.

“In this pilot production implementation in a single state, it proves that the system can work for that line of business for Nationwide, but it’s the first step in the journey,” Furtado comments. “We are awaiting answers to the questions of handling complex lines, multiple state implement and dealing with product change and the scalability to support Tier 1 lines of business.”

When it comes to the first successful implementation of a package policy administration system at a household name insurer, “So far so good” is a story in itself. But to borrow from Churchill’s celebration of El Alamein, the Allies’ first great victory of WWII: this is not the end. It is not even the beginning of the end. But it is, perhaps, the end of the beginning.