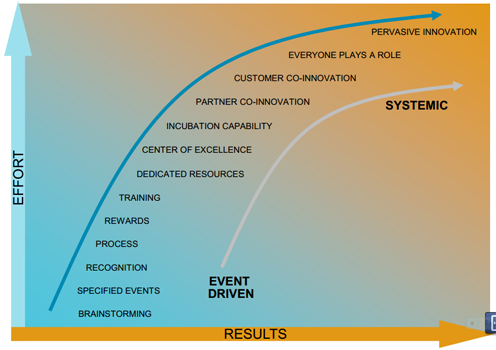 (Insurers remain stuck somewhere in the middle of this curve representing the natural progression of innovation culture. Source: Simonelli Innovation, LLC, via Celent.)

Innovation is easy to cheer for, but harder to make happen at insurance companies, according to Craig Weber, CEO, Celent, who spoke at the StoneRiver Summit user group meeting this week in Austin, Texas. Sixty-two percent of respondents to a Celent survey reported having C-level support for innovation, and nearly a third had innovation centers of excellence. However, internal friction impedes innovation at insurers because some officers support it and others fail to see its value, according to Weber. While CEOs were considered generally supportive of innovation initiatives, with a net promoter score (NPS) of 12 percent, Celent’s respondents found CFOs solidly unsupportive, with an NPS of -57 percent. “There’s organizational friction because people are all over the map when it comes to innovation,” Weber said. “Some people like it some don’t…people in the CFO’s office probably aren’t going to support it.”

Consumers do not think of insurers as innovators, rating them well below other entities – such as online retailers, banks and telecommunications companies – for the ability to deliver a “great shopping or service experience by smart use of technology,” Weber reported.

Five Ideas to Change the World

However, insurers should aspire to do better in light of emerging technologies that could substantially affect the insurance industry, such as cheap DNA sequencing, social commerce, smart energy grids and crash-proof cars. “The future may not wait for us,” Weber cautioned.
As a remedy, Weber proposed – with admitted hyperbole – “five ideas to change the world.”

“Many firms talk about innovation, and their advertising may promote innovation, but in firms there’s not a great understanding of what it even means,” Weber cautioned. “If you have an innovation office, they might mean it in one of these three ways.”

“If you’re looking [to achieve] disruption, customer engagement is probably the place,” he added.

Weber’s third “idea” was to establish a disciplined innovation process, built along a continuum including the steps: generate, choose, develop, launch and measure. Weber stressed the preparation of a procedural foundation for upon which to exercise creativity. “Companies rarely do the mechanical things… that will establish innovation,” he said.

Within that process, Weber emphasized the need to establish a company culture that accommodated “fast/cheap failure” as an incentive to explore ideas.
Turning to insight from Nick Simonelli, former USAA innovation practice leader and founder of Simonelli Innovation LLC, for his fourth recommendation, Weber advised that insurers think about innovation in terms of a natural progression. Insurers should begin with uninhibited brain-storming and ad hoc efforts seeking to advance ultimately to “pervasive innovation.” The ideal progression would be one that began with event-driven work, climbing steeply past a point where the company can establish an innovation center of excellence. The curve would then flatten before reaching a plane on which innovative activities became systemic across the company.

“Most companies are stuck around the center of excellence, in the middle [of the curve],” Weber reported. “Almost no one in is all the way up on the right except for product companies, companies that you think of as having innovation as their focus, such as 3M.”

Weber’s fifth and final recommendation was to create realistic expectations of flow and failure. Innovation projects move from discovery to research and exploration to concept development and testing to pilot launch, Weber related. At the beginning of that progression, ideas abound, but few survive to the end, he said. “There is a disconnect in insurance with regard to what it takes to be successful at innovation, and the likely result of most efforts, which is failure,” he warned.