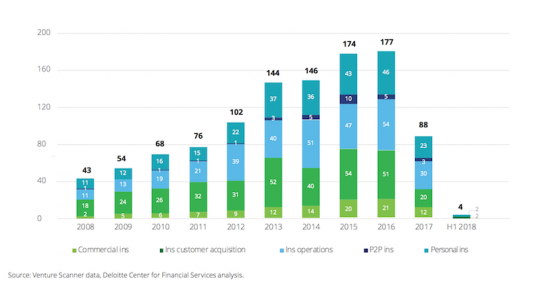 Attendance at this week’s InsureTech Connect 2018 conference was about four times than the event’s debut two years ago, and about twice what it was last year. That probably says something about whether interest in the movement has grown, but one may need to look closer to divine exactly how that interest is evolving. In a new POV paper, “InsurTech entering its second wave,” Deloitte does just that, analyzing InsurTech financing deals tracked by Venture Scanner over the past 18 months. What the firm found was that the movement has hit an “inflection point” whereby investment in new startups has plummeted, but funding remains robust for more established innovators. During the first half of 2018, there were only four InsurTech launches, continuing a downward trend observed in 2017, according to Deloitte. However, the amount of capital flowing into the movement has not abated, with first-half-of-the-year investments of $869 million, which the paper’s authors say puts the industry on course to meet the $1.82 billion raised in 2017—the second most recorded since deals began to be tracked.

“The money is there, but it’s going into later-stage investments, demonstrating that insurers are becoming more strategic in their interaction with InsurTechs,” comments Sam Friedman, Insurance Research Leader in the Deloitte Center for Financial Services and co-author of the paper. “Insurers are shifting to a mindset of progress over potential, looking at what’s out there and deciding where to place bets where they can expect a tangible return.”

The shift to a more focused and mature investment strategy is a natural enough development as experience in the field grows, and it follows an established pattern, according to Friedman. “We’ve seen fundamentally the same trajectory in other financial industries,” he notes.

InsurTech has been far more of a personal lines phenomenon from the beginning, representing 55 percent of total InsurTech investment through the first half of 2018, with commercial drawing less than 7 percent during the same period. “Our sense is that personal lines has been saturated,” comments Friedman. “I don’t know if we’ve seen the end there, but I doubt we’ll see the dozens or hundreds that we’ve seen in the past—more likely there will be a shift to other sectors.”

InsurTechs activity focused on life and annuities has been anemic compared to the property/casualty sector, but that trend is likely to change as life insurers seek to streamline products, simplify underwriting and advance self-service distribution systems, according to the paper. Deliotte also notes a geographic shift. The U.S. still receives the greatest amount of investment, but InsurTech development has become a global phenomenon, according to the paper. Over half of all InsurTech launches happened in the U.S. during the past decade, accounting for 63 percent of funds invested. However, that began to change in 2013, when two thirds of funding went outside the country. Deloitte reports that in the first half of 2018, Asia was the leading destination for InsurTech dollars, with total investments of $189 million.

Given that insurers are shifting their attention to more mature innovators, Deloitte expects that InsurTech mergers and acquisitions are likely to play an increasing role in the movement. Only about one in ten startups were eventually acquired by others during the past decade, but the paper says that the pace of M&A may accelerate as insurers consider ways to boost their capabilities.

It is as insurers grow more adept at digesting the innovations of InsurTechs that the movement will start paying its greatest dividends, Friedman suggests. During the early phases of InsurTech, there was much discussion about the potential “existential threats” that incumbents might face from what Friedman calls “standalone InsurTechs”—companies that seek to sell insurance, whether as carriers or distributors. This year’s InsureTech Connect continued to emphasize standalones, but the greater promise of the InsurTech movement is in the other companies represented at the show—the vendors who offer incumbents capabilities that can improve processes or open up possibilities for new business models.

“InsurTechs often lack industry knowledge and capital, and insurers have the money, the expertise, the knowledge of regulatory hurdles, so it’s a very symbiotic, complementary relationship,” Friedman comments. “The spotlight may be shining on the standalones, but the real progress is being made with the InsurTechs that are friends, not foes, bringing solutions in areas such as AI, blockchain, better claims management and the connectivity capabilities of IoT.”