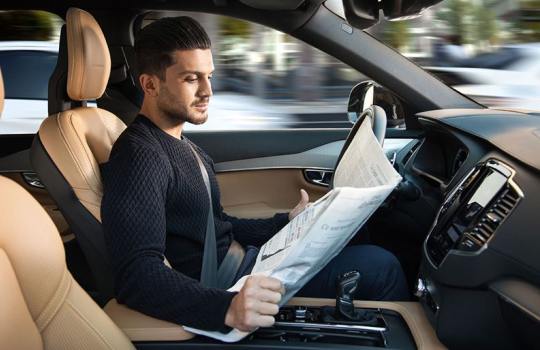 (Image source: Volvo, which has accepted liability for autonomous vehicles.)

Consumers will start to adopt autonomous vehicles (AVs) by 2020, and AVs will be the primary mode of transportation by 2050, according to McKinsey & Co. research—but 65 percent of businesses’ corporate risk managers say they have done nothing to prepare, reports Munich Re (Munich), which conducted a survey of corporate risk managers at the 2016 Risk and Insurance Management Society Conference (RIMS). Of the respondents who said their companies have taken some form of action to prepare, 23 percent have discussed AV technology internally, eight percent have established a task force, and four percent have created an operational plan.

“With innovative companies making significant strides in the development of self-driving cars, it’s no longer a matter of if, but rather when the time will come for the wide-scale adoption of AVs,” asserts Tony Kuczinski, President and CEO of Munich Reinsurance America, Inc. (Princeton, N.J.). “The timeline for adoption may be sooner than many realize. As such, it’s important for companies to start preparing now for how this technology could potentially impact their business, to both leverage opportunities and most effectively mitigate risks.”

The importance of autonomous vehicle technology is simple:  driver error is the cause of 94 percent of accidents, according to the National Highway Traffic Safety Administration (NHTSA). By reducing driver error, AV technology could significantly reduce the number of motor vehicle accidents and have wide-ranging implications for the insurance industry, starting with significantly reduced claims which will in turn impact premium.

“As AV technology progresses, the potential risk exposures and their implications for the insurance industry and society will continue to evolve,” Munich Re’s Kuczinski adds. “Cyber security in particular is one area we’re watching closely, as the vulnerability and implementation of safeguards for AVs remains to be seen.” The Munich Re survey found that security of technology is a top priority for risk managers, reporting that the majority of survey respondents (55 percent) say cyber security is the greatest insurance concern associated with AVs. That was followed by allocation of liability when autonomous/non-autonomous vehicles share roads (27 percent), economic disruption (seven percent), safety (seven percent), and the cost of technology to repair damaged vehicles (four percent). From a cyber security perspective, respondents believe the greatest threats to AVs are auto theft by an unknown individual hacking into and overtaking vehicle data systems (42 percent) and the failure of smart road infrastructure technologies (36 percent).

When asked what they thought posed the greatest challenge to the widespread adoption of AVs, nearly half of the risk managers (41 percent) cited regulatory or legislative obstacles, followed by safety (24 percent), security of technology (19 percent), cost (11 percent), and the ability to function in all weather and road conditions (five percent), Munich Re reports.

In 2015 Munich Re established a Mobility Domain focus on strategic partnerships and pilot projects that will enable the company and its clients to develop risk management solutions for areas such as vehicle telematics, autonomous vehicles, shared-use mobility and collision avoidance technology.

“Hats off to Munich Re for raising the question of the impact of autonomous vehicles with risk managers at the recent RIMS conference,” comments Donald Light, Director, North America Property/Casualty Practice, Celent (Boston). “Only about a third of risk managers said their firms had done much planning or analysis regarding autonomous vehicles—which may be ok for mid-2016.  But with the very real prospect of AVs being available by 2020—including in commercial fleets—this would be a good time for the other two-thirds of the risk managers to start pondering.”

Key questions related to AVs include liability when there are person/machine hand-offs of control (quite possibly present in early generation AVs); and the cost-saving impact of driverless commercial fleets, Light notes. “The latter topic is not a risk management issue, per se—but I’ll bet a lot of risk managers could get some plus points with their CFO’s by raising this topic now,” Light asserts.

Before AVs, the Impact of Collision Avoidance

AVs are not the only matter for concern when it comes to the impact of vehicle technology on human error, and thus on insurance claims and premium, in Light’s view. “It would certainly also be interested to know what if anything Risk Managers are doing with regard to collision avoidance technology which is increasing the available today on both sedans and small trucks,” he comments.

In June 2015 The National Transportation Safety Board (NTSB) released a report recommending that rear-end collision avoidance systems (CAS)—including collision warning and active braking—be made standard for new automobiles. Later in 2015, The Insurance Institute for Highway Safety reported that it had invested $30 million in its Vehicle Research Center to study “systems that help the driver do the right thing.” MarketsandMarkets, a Pune, India-based research firm, reported in Nov. 2015 that the collision avoidance system market will be worth over $50 billion by 2020.

“If I was a risk manager I would want to do some cost-benefit analyses of the incremental cost of having those technologies on my new vehicles against savings in Insurance costs insurance costs as well as operational costs,” Light says.

Collision Avoidance Will Impact Insurance Premium Before Driverless Cars Do

Note of correction: The headline of the story originally said “insurers” rather than businesses. In fact, respondents to the survey included risk managers from multiple industries.