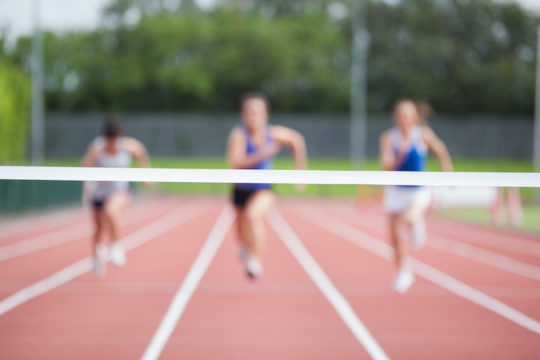 I’m a big fan of the summer Olympics.  And despite some lingering difficulties caused by COVID, it’s great to see the games being played again after being delayed by a year. It’s another part of the world’s slow and sometimes uncertain return to normal. It’s a chance for thousands of highly-driven and dedicated athletes to showcase their talents, promote their country and thrill millions of spectators around the world.

Two observations about Olympic competition really stand out in my mind. First, it’s amazing to see how these gifted athletes can make extremely difficult and sometimes complex feats look graceful and effortless—like the amazing Simone Biles who is a wonder! And for most, their events last just a short time (the men’s 100M dash Olympic record is just 9.63 seconds set by Usain Bolt in 2012!), but the vision, time, work and dedication that lead to these levels of performance are likely not fully appreciated by those of us who watch from our comfortable chairs. Second, because Olympic events are stacked with talented athletes determined to win, many of them have thrilling finishes, with mere seconds—even hundredths of a second—making the difference between gold, silver or bronze places—remember Michael Phelps’ and Katie Ledecky’s races!

These two Olympic observations have interesting parallels with insurance. The first one highlights a similarity between the two: insurance is complex product and often difficult to buy or understand but the best companies—both incumbents and startups—are pushing for gold by making it simple and effortless for their customers.

The second observation highlights a big difference. While the “gold medal group” of the best companies could be considered to have “photo finishes” with each other, when the whole field of insurance competitors is considered, the gaps between the gold, silver and bronze finishers are alarmingly large. And with the pace of change in technology, new channels and entrants, and changing customer demographics, behaviors and expectations (all accelerated by COVID), companies in the bronze medal group may find themselves rapidly moving from competitor to spectator in future “insurance Olympic games.”

Some Races Aren’t Even Close

We have been tracking an insurer version of gold, silver and bronze medalists with the Leaders, Followers and Laggards segments in our annual Strategic Priorities research.  These segments are based on insurers’ outlooks and expectations for their companies in the next three years based on their responses about plans for new products, channels, business models, and other strategic issues. As seen in Figure 1, the Leaders significantly outpace the other two segments, with gaps of 102 percent and 28 percent between Laggards and Followers, respectively.

Figure 1: Gaps between the Leaders, Followers and Laggards segments

In 2019, AM Best also started tracking winners in the insurer innovation game, issuing its first report in March 2020. In AM Best’s Innovation Assessment, a company can get a maximum score of 16 in each of two innovation components, Inputs (with 4 sub-components: leadership, culture, resources, processes and structure), and Outputs (with two double-weighted sub-components: results and level of transformation); a top score in both categories would produce a maximum score of 32.

AM Best created five innovation categories with pre-defined score ranges, which allows them to compare scores across lines of business and track changes in the distributions of scores over time.  Insurance Journal summarized results from the 2020 and 2021 assessments, highlighting reinsurers having the highest innovation scores, but also an overall downward shift year-over-year in the percentage of Prominent and Leader results, from 10 percent to 7 percent.[i] 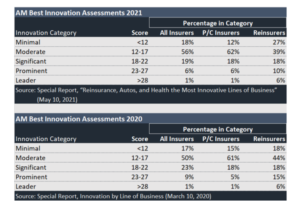 Since the Olympics award only three levels of medals, I collapsed the five AM Best categories into three, which also correlates them with the Leaders, Followers and Laggards from our Strategic Priorities research:

So, from two different reviews and methodologies, we’re seeing remarkably similar conclusions about the gaps in performance of the “athlete insurers” in the insurance Olympics. It’s kind of like two different TV networks covering the Olympics but reporting the same results from slightly different viewpoints. 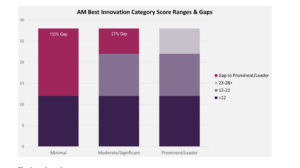 Before delving into the results of the individual “events” covered by the Strategic Priorities research, we asked companies’ to assess their performance and level of strategic activities over the previous year. The gap between Leaders and Laggards was the largest we have ever seen, more than doubling in size in three years!  In contrast, the gap between Leaders and Followers has been slowly shrinking.  Laggards’ gap with both Leaders and Followers reflects a stark reality of their lack of awareness, planning and execution that is diminishing their relevance and putting their future at an increasingly greater risk.

When looking at the individual events where Leaders are winning, they are solid gold medalists in all but one of these events, tying with Followers on incorporating platform technologies.

For insurers to win today and in the future, improving their digital capabilities is the key. But simply adding disparate digital portals or single functions like digital payments won’t cut it.  Becoming a digital insurer requires a cultural change and mind shift to a new way of thinking, planning, and doing. Leaders know this. Leaders are doing this.

They are leveraging digital technologies to enhance customer and employee experiences and to improve their strategic and operational capabilities. In these new “digital events,” Leaders soundly beat the Laggards in Digital employee benefits onboarding and engagement (28%), Intelligent digital claims intake (22%) Innovative, personalized products (43%), Intelligent digital marketing (48%) and segmentation (61%), and Digital assets for reporting, modeling or compliance (35%).

Today’s customers are increasingly digitally adept, with higher expectations, different needs and a demand for better experiences that are not met with the “traditional” insurance approach, creating a fault line between customers’ expectations and insurers’ ability to deliver.  These digital gaps will become the new competitive differentiators.

There are interesting parallels between Olympic athletes and insurers. But while Olympic athletes have to put all of their hard work to the test every four years, insurers have to do it every day, without letting up. And they are faced with new startups and new entrants from outside the industry—challenging them in their own game with new, enhanced digital capabilities that are raising the bar.

Is your company fit enough for winning both today and in the future? Are you going for the gold? Read the Strategic Priorities report to develop your Olympic-caliber training plan!