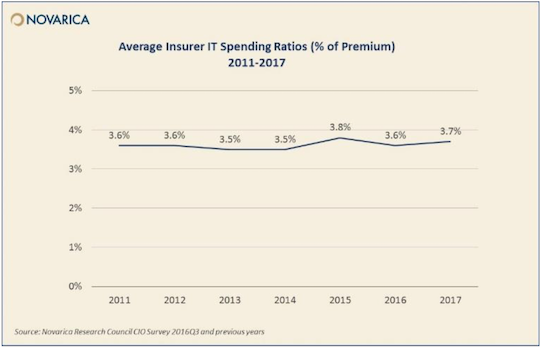 It’s only reasonable to expect that an industry in urgent need of change, when given the means to achieve it, would leap to the opportunity. And yet, when it comes to the chance that available technology gives them modernize, insurers’ enthusiasm is strangely muted. That’s the conclusion suggested by the findings of Novarica’s Insurer IT Budgets and Projects 2017 survey report. Based on a survey of over 100 CIO members of the research and advisory firm’s Insurance Technology Research Council, the report found that insurers’ technology budgets remain essentially unchanged from 2011 to 2017. “With the exception of large life/annuity insurers, who reported an average decrease of approximately 7 percent, the other groups in the study reported low single-digit growth in IT spending ratios.”

The survey found that overall average IT budget ratio is 3.7 percent of premium, with large life/annuity companies at 2 percent, and midsized property/casualty companies averaging 4.1 percent, a level Novarica says is “essentially consistent with the last seven years.”

Staying the course on spending in the face of rapidly changing technology needs represents a missed opportunity, comment the study’s authors under a heading that reads, “A Foolish Consistency?”

However, the question remains as to the overall seriousness of insurers commitment to modernization as measured by the extent to which they’re willing to invest in that ambition.

“Unfortunately, too many insurers still manage IT as a cost center rather than as a strategic investment that can yield competitive advantage,” the authors of the report lament.

“With over a billion dollars of recent InsurTech investments and massive technology-enabled change looming over the industry, it is somewhat disheartening to see that insurers are not devoting more resources to their own technology enabled evolution,” the report continues.

It may be objected that a sizeable chunk of that over-a-billion dollars has been contributed by insurers themselves. Many have invested in tech-driven startups, either directly or through entities such as the Global Insurance Accelerator or the Silicon Valley Insurance Accelerator. The mere existence of those bodies shows greater interest in advancing technology than internal innovation teams or “sandboxes.”

However, noted Matthew Josefowicz, president and CEO of Novarica and co-author of the report in a conversation with Insurance Innovation Reporter, “While investments in accelerators and startups are an important way for carriers to stay up-to-date on potential disruption and start to explore ways to harness the changes in technology, few carriers are really making significant investments in these areas compared to the amounts they’re spending in their IT budgets.”

The report sites challenging market conditions, the budgetary constraints imposed by low investment returns, and insurers’ lack of confidence in their ability to achieve a suitable return on their technology investments. However, the authors comment, “given the massive changes already starting to affect the industry, this continuation of historical investment patterns is unlikely to be sustainable.”

The statement begs the question as to insurers can’t get away with underspending on technology over the longer term. One possible reason may be that they will be unprepared for IT security threats. Cyberattacks are a matter of serious discussion within insurance and financial services generally. Whether they are a matter of sufficiently serious action is another question. “Notably, for all the hype and focus on IT security, fewer than one in five participants [in the survey] cited it in their top three priorities for 2017,” the authors say. However, the greater risk may be failing to live up to challenges from competitors willing to invest in the potential of emerging technology, the authors of the Novarica study warn. “As new entrants from Silicon Valley and Wall Street target the industry with a focus on exploiting not only a weak record in customer service but a traditionalist approach to risk assessment and operations, insurers will need more expansive technology capabilities to compete effectively,” they say.  “Since resources are not infinite, this will require shifting resources from current expense areas to IT—something few insurers are inclined to do.”

The cure Novarica suggests is that insurers rethink their approach to IT budgeting. “Rather than ask how little they can spend on IT this year, insurers should be asking themselves how much they can afford to invest in order to remain competitive now and in the future,” the report concludes.