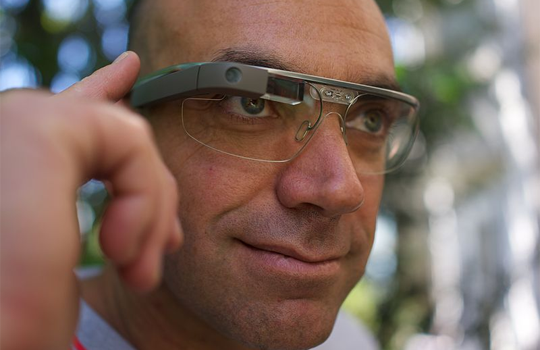 Novarica’s new Executive Brief, Wearable Technologies and Insurance, asserts that 2014 promises to be the year of wearable technology and that, accordingly, insurers aspiring to provide cutting-edge customer service should evaluate their potential use. The recommendation sounds futuristic, but adoption of wearables has proliferated to such an extent that they are becoming just another channel for customer interaction, along with other uses relevant to insurance.

Adoption of devices such as Google Glass (see illustration above) –  a wearable computer with an optical head-mounted display – may still be confined to chasers of the latest thing and those willing and able to shell out $1500 for the experience. But wearable computing devices have enjoyed mainstream adoption for purposes such as tracking fitness activity. For example, the frugal author of this essay uses the free BikeComputer iPhone app on his daily ride (to track distance, time and other metrics) and wonders whether the convenience a wrist-mounted display might be worth paying for. The success of recent devices such as the Pebble smartwatch, Fitbit, Nike and Jawbone fitness tracking bands are likely to drive expanded adoption this year, according to Tom Benton, principal at Novarica, and author of the brief. Benton defines wearables as devices available to the general public that leverage smartphone connections to exchange information. Devices are generally worn as headgear or wristbands. The utility of wearables resides in three major capabilities according to Benton:

Capturing Data Near  the Wearer: Such as Google Glass’ ability to capture video and audio – which Benton reports National ConnectForce Claims is evaluating for use by adjusters to provide real-time feedback from the field.

Capturing Data About  the Wearer: Probably the largest functional category today, this includes Fitbit and other fitness tracking devices. The information recorded by such devices could be “traded” with an individual’s insurer to lower life or health insurance premium, similarly to the way telematics information can lower auto premium, Benton suggests. He reports that vendor EveryMove, which offers applications that encourage more healthy behavior through incentives, plans to partner with health insurance plans to “differentiate and build brand loyalty,” and which has developed a “patented actuarial point system” and analytics-driven features to drive rewards programs.

Providing Feedback To  the Wearer: These capabilities can be featured in fitness-related applications but they can also be used to deliver information alerts of all sorts in hands-free fashion. Benton notes Fidelity’s smartwatch app, which gives customer market information and alerts, and suggests that similar capabilities could be used to foster more customer interaction related to insurance and investment products.

Benton says that insurers should think about ways to apply these capabilities during the current year. He writes:

Insurers can prepare by understanding wearable technology capabilities and how data collected from or provided to devices can be applied to interactions with insurance processes, such as new business and underwriting, policyholder services, claims and other areas like billing and statements. Insurers should also consider the potential impact of wearables on customer experience for agents, policyholders and part of an overall mobile communication strategy.

In other words, wearables constitute a new information channel that can be leveraged for insurance purposes much like telematics – and in most cases without the insurer having to invest in the box. Also, wearable devices are simply another preferred channel for consumers to gather information and communicate. As such, they need to on insurers list of multichannel customer communications.

During the early 2000s, mobile devices emerged as options for insurance field personnel – such as portable “brick” computers and ruggedized laptops for claims adjusters – as well as communications devices for senior executives – the original Blackberry users, who provided an echo of the early adoption period of mobile phones, when holding an ridiculously outsized device was an indication of status.

Since the advent of “consumerization” of technology – in the sense of mass adoption of portable computing devices – advances in anywhere/anytime computing are rightly seen as consumer-related developments. But in the case of mass adoption of wearable technology, insurers should – as Benton suggests – diligently seek ways to adapt wearables for use by internal personnel, in the field and elsewhere.