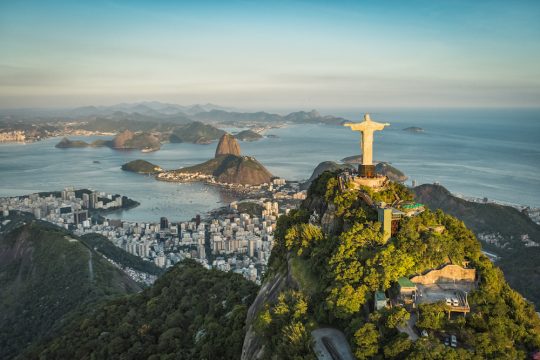 The nation of Brazil is one of five regions represented in Insurance Innovation Reporter’s Five Star Awards, recognizing outstanding contributions by executives using technology to advance their companies’ objectives.

SulAmérica Seguros (Rio de Janeiro) has stayed in the top tier of Brazilian insurers through its innovative business sense and as CIO, Cristiano Barbieri is tasked with providing technology that supports business innovation. Among his recent initiatives are leading an enterprise digital transformation program and implementing the digital strategy of SulAmérica salud, a key program of the company designed to maintain the leadership of SulAmérica in the Brazilian health insurance market. Barbieri has driven many Salesforce initiatives across the company in order to increase speed-to-market and reduce infrastructure and software maintenance costs.

Nádia Alencar’s strategic acumen ranges from an understanding of what products will succeed in the market to the specifics of the technology systems, architecture and infrastructure needed to support them. Since arriving at AXA Brasil (São Paulo), Alencar has driven the adoption of multi-line business architecture with plug-and-play components to enable an agile response to a changing market. The company subsequently created 28 products from scratch in record time with a resulting sustained growth of approximately 100 percent year-over-year. Alencar has restructured IT for AXA’s Brazilian operation, managing the post-acquisition integration of the systems of one of Brazil’s largest insurers. She has also driven implementation of ERP for AXA in Brazil and the Netherlands Antilles. As an operations leader Alencar has driven an operations model for AXA in Latin America and opened up a successful affinity distribution channel. Roberto Rubim has guided BNP Paribas Cardif Brasil (São Paulo) through successive technology waves, pioneering their use in the Brazilian market, with an emphasis on digital customer experience. He led implementation of the first full first notice of loss and claims tracking for Cardif Brasil customers in 2013, following up with the use of WhatsApp for claims. Rubim also drove the first use of chat bots in the sale of auto insurance, with Cardif debuting the technology with its customers in 2017.

Curt Zimmerman, Director of IT, Operations, Organizations and Projects, Bradesco Curt Zimmerman, Director of IT, Operations, Organizations and Projects, Bradesco.

Curt Zimmerman arrived at Bradesco (São Paulo) in 2015 as a result of the company’s acquiring HSBC’s Brazilian operation, where he served as COO. He formerly held executive roles in several industries, at companies such as BRF, Unbanco, Booz Allen, and Daimler Benz. Among recent initiatives he has led at Bradesco are the customer focused digital applications, such Bradesco Seguros Celular—a mobile app that addresses all of a customer’s insurance needs and includes a AI-powered chat bot—and online one-stop sales platform Shopping de Seguros. Zimmerman has also undertaken a restructuring of Bradesco’s systems, leading the company’s Integrated Insurance Platform initiative. He recently oversaw implementation of SAP to support Bradesco’s administrative and financial areas, compliance and provide a 360 view of policyholders; and he has driven the Papel Zero initiative that has avoided the printing of approximately 300 million pages of documents—the equivalent of 700 tons of trees—and established a completely digital document life cycle. CIOs are often categorized as being either maintainers or renovators; Wilson Leal is both. While driving the highest standards in the running of Tokio Marine Seguradora’s (São Paulo) IT systems, he is always looking to the future and introducing news of technology’s potential for the insurer’s operations. Among his most recent innovation-related initiatives are the development of a new data center with state-of-the-art technology, and the introduction of a chat bot for brokers and internal developers that utilizes IBM Watson. Leal has reduced implementation risk at Tokio Marine Seguradora through the introduction of the agile development methodology.