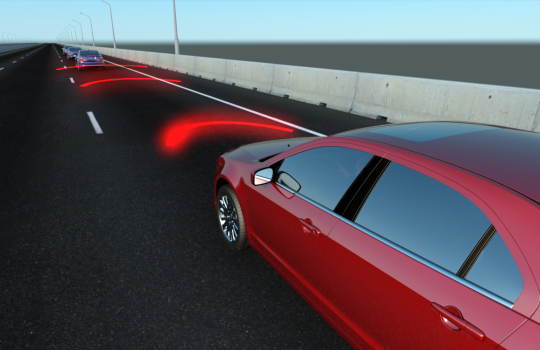 While “autonomous” vehicles tend to get the headlines, collision avoidance technologies will have the greatest effect on automobile safety and, consequently, insurance premium for the foreseeable future. To enhance its ability to study these technologies—such as adaptive headlines and front-crash prevention capabilities—the Insurance Institute for Highway Safety (IIHS, Arlington, Va.) has invested $30 million to improve its testing facility, the Vehicle Research Center in Ruckersville, Va. Since the IIHS’s foundation in 1959, annual automotive deaths in the U.S. have declined from about 50,000 to 30,000. The organization has played an important role in that decline, as exemplified by the performance of vehicles in crashes according to their rating on the IIHS’s scale. Collision avoidance technologies have the potential to reduce automotive death and injury much more dramatically, as they function to eliminate the chief cause of accidents: human error.

The IIHS’s president Adrian Lund characterizes collision avoidance technologies as “systems that help the driver do the right thing.” The IIHS has adopted “Vision Zero”—a policy aimed at the somewhat quixotic goal of reducing the number of annual highway deaths to the vanishing point. The purpose of the organization’s research into collision avoidance is to determine whether and how well the technologies work.

“What’s going to be important…is to understand ‘how does the driver respond to a vehicle that knows more and more, and is ready to take action for them?’” Lund has said in a public service announcement. “We don’t know whether people will find that acceptable, we don’t know if they will try to defeat it. And we also don’t know exactly how well it will act physically in the kinds of circumstances where crashes occur.

Those are the kinds of circumstances that the IIHS hopes to be able to reproduce through its investments in the Vehicle Research Center. The centerpiece of the investment is the construction of a five-acre covered track—one of the largest fabric-covered structures in North America—which will allow testing to continue regardless of weather. Six fabric panels supported by steel trusses arc over the 700-foot-by-300-foot track and are supported by 18 concrete piers, which weigh a total of 7,000 tons and contain more than 39 miles of steel reinforcement bars. The improvements also included the expansion of an existing outdoor track, bringing the total area of track, including the covered section, to 15 acres. A new office and conference space was also part of the initiative. Collision avoidance is a step on a continuum to full autonomy, according to David Zuby, executive VP for IIHS and the Highway Loss Data Institute (HLDI). Automotive expert Zack Kanter notoriously wrote early this year that by 2015 autonomous vehicles would have destroyed 10 million jobs and reshaped the American economy. Other observers have offered 2030 as a likely milestone by which autonomous vehicles would be prevalent. However, pervasive adoption of advanced collision avoidance technologies is a long way off, let alone similar levels of adoption of fully autonomous vehicles, IIHS’s Zuby cautions.

Timeframe for Adoption of Collision Avoidance

The IIHS has estimated the time it will take for a given collision avoidance improvement to reach 95 percent of the fleet of all registered vehicles, applying assumptions about attrition, according to Zuby. “It will be 30 to 40 years before you reach 95 percent of vehicles including some of the capabilities that we’re studying today,” he says. “Many of these improvements are optional rather than standard, which pushes the date even further out.”