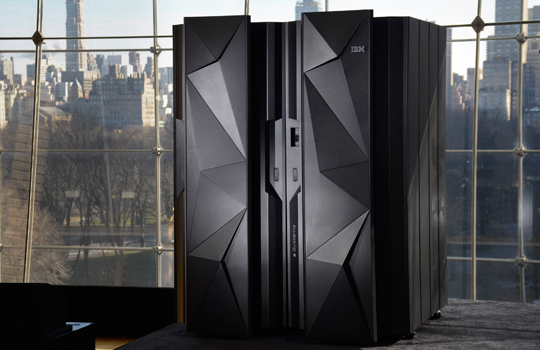 (Image of the IBM z13 courtesy of the vendor.)

IBM has launched z13, a new mainframe computer capable of processing 2.5 billion transactions daily, which the vendor notes is the equivalent of 100 Cyber Mondays every day. The new system, which the manufacturer says represents $1 billion in R&D, 500 new patents and collaboration with over 60 clients, was designed to meet the demands of the mobile economy, according to IBM.

IBM describes the z13 as the first system to make practical real-time encryption of all mobile transactions at any scale. The z13 is also the first mainframe system with embedded analytics providing real-time insights into all transactions, according to the vendor. That capability can help guarantee the ability of the user to run real-time fraud detection on 100 percent of business transactions by delivering on-the-fly analytic insights that are 17 times faster than competitive systems, and at a fraction of the cost, a vendor statement asserts. “Every time a consumer makes a purchase or hits refresh on a smart phone, it can create a cascade of events on the back end of the computing environment,” Rosamilia comments. “Only the IBM mainframe can put the power of the world’s most secure datacenters in the palm of your hand.”

Real-Time Fraud Analysis for All Transactions

Among the insurance-specific benefits of the z13 is the ability to identify potentially fraudulent claims in real time, according to Kathryn Guarini, VP, z Systems Growth, IBM. “Now we can identify these claims using scoring during adjudication, right at the point of impact, using current data,” she says.

“One of the benefits [of the z13] is that now our clients can avoid the complex ETL process that has been standard—moving data off-platform, creating multiple copies of data and a redundant security risk,” Guarini elaborates. “It presents an opportunity for real-time scoring on 100 percent of transactions rather than a smaller set.”

Insurers should welcome a mainframe option that can be installed on-premise and promises to scale in order to meet the demands of digital business, opines Craig Beattie, a U.K.-based senior analyst with Celent (Boston). “To the consumer an app looks like a 3 minute download that just works,” he notes. “Any CIO knows that behind that app ‘that just works’ needs to be a scalable infrastructure that matches today’s customers’ expectations.” Supporting the Growth of Analytics and Big Data

IBM’s investment in a system that meets emerging load and security demands represents a welcome reassertion of commitment to financial services companies, which still process the bulk of their transactions on the vendor’s mainframe technology, according to Tom Scales, a U.S.-based research director with Celent.

“The inclusion of real-time encryption is particularly meaningful in a world were data breaches are announced almost daily,” Scales says. In the case of insurers, he adds, “much of the mainframe power will be used for companies’ legacy apps. While aging, these apps process millions of policies and as volumes increase, so must power. Encrypting the data requires even more power.”

Scales expect insurers to consider consolidating some of their web technology onto the mainframe, as many already do. “Perhaps most importantly, as insurers do more with data analytics and Big data, the ability to process those analyses on the same platform as the source data has big benefit,” he stresses. “It eliminates a huge step in making the results available quickly and cheaply.”