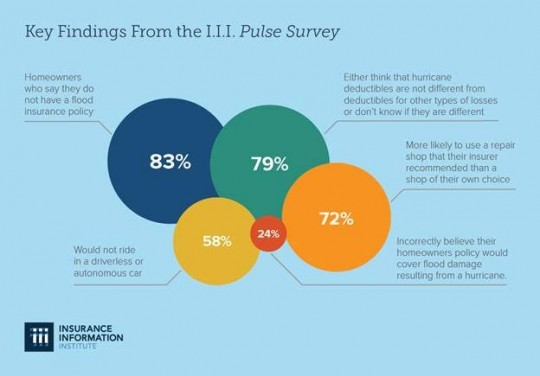 This year’s Insurance Information Institute (I.I.I., New York) Pulse Survey report on consumer beliefs about insurance included some interesting findings about consumers’ attitudes toward emerging technologies. However, it mostly showed that insurers continue to fail to educate customers about products and coverages. The question is whether insurers will be able to go on this way in a world of rapid information exchange.

The survey report, PulsePoints: Home and Auto Insurance, polled 1,000 American consumers on questions about about their insurance and the protective measures they took to prepare for a catastrophe. I.I.I. also surveyed Americans’ sentiments about emerging technologies that could affect their insurance needs and pricing, e.g., telematics devices and self-driving cars.

Some of the results were either depressingly or reassuringly familiar, depending on one’s point of view. Just as for the past 50 years or so, many consumers are still in the dark when it comes to understanding coverage, for example, nearly a quarter (24 percent) incorrectly believe that their homeowners policy would cover flood damage resulting from a hurricane, and another 19 percent responded that they didn’t know. About four-fifths (79 percent) either think that hurricane deductibles are not different from deductibles for other types of losses or don’t know if they are different. Only one out of 10 homeowners across the said they had coverage for damage from an earthquake, though the proportion was greatest in the more earthquake-prone West, where 18 percent of homeowners said they had purchased separate earthquake insurance coverage.

“Insurers have traditionally made their product complexity the customer’s problem, and made it the customers’ responsibility to seek help from an expert advisor,” comments Matthew Josefowicz, president and CEO of Boston-based research and advisory firm Novarica. “That worked in a world of information scarcity and analog communication speed, but it’s no longer viable. Insurers now have the choice of either making the products simpler to understand, or just making them actually simpler in the first place.” Insurance would not be the first industry to be disrupted by available data. Car dealers thrived within a universe where sellers had a powerful information advantage over buyers within a traditionally negotiated transaction. Transparency changed that game, and today many consumers are wondering why they should have to negotiate at all.

While insurers are accustomed to consumers not understanding their products very well, they might also benefit from greater transparency and simplicity in personal lines products, suggests Josefowicz. “Insurers have resisted reducing product complexity, in part to avoid alarming distributors,” he comments. “But selling a product that buyers actually understand could have massive benefits for distributors in increasing the available market.” The opportunity of an increasingly transparent marketplace goes beyond merely simpler products, stresses Deb Smallwood, founder of Boston-based research and advisory firm SMA. “Insurers have a significant opportunity to bring new value-added services to their customer base,” she comments. “Full customer transparency coupled with advanced analytics will provide direct insights on protection and coverage levels for their customers and begin to educate the market on gaps.  The data and technologies are available, the prioritizing and funding now needs to happen.”

The Pulse survey’s exploration of consumer attitudes toward emerging technologies shows readiness for a more transparent relationship, particularly among younger consumers. For example, in the case of usage-based insurance, 61 percent of insured motorists between the ages of 18 and 34 would agree to allow insurers to collect information about their driving habits. But when it came to driverless cars consumers were, by and large, reluctant to embrace the technology and had misconceptions about its likely effects on premium. It is perhaps not surprising that 58 percent of respondents were not willing to ride in a driverless car, given that the technology is in the R&D stage, observes Donald Light, Director,  North America Property/Casualty Practice, Celent (Boston). “On the other hand, how many of those people have flown on an airplane that an auto-pilot landed,” he comments. “At least the driverless car starts out—and should end up—on the ground.” Oddly, more respondents believed that their insurance premiums would go up with driverless cars (48 percent) than believed they would go down (35 percent), Light notes. “Auto insurance companies should be so lucky,” he quips.