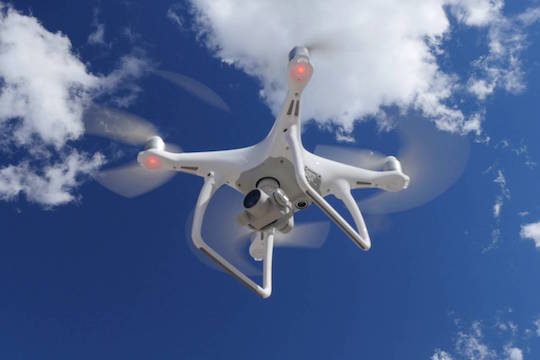 From the devastation of this summer’s major hurricanes—Harvey, Irma, and Maria—have come new lessons in lifesaving that business, government, and rescue services have taken to heart. Not least among these is that drones can be an integral part of rescue activities, helping to significantly cut down the time needed to provide assistance to victims of disasters of all kinds. Assistance goes beyond providing the survival essentials people need in the immediate aftermath of a disaster; it also means providing for the needs of victims longer-term, such as making it easier for them to file insurance claims in order to rebuild their lives, and making it easier for insurance companies to provide them with the money they need.

Despite the significant advantages afforded by drones, the insurance business is demonstrating its legendary conservatism when it comes to availing itself of those benefits.  A report by Goldman-Sachs sees the insurance business running a poor third, behind construction and agriculture, when it comes to implementing and using drones. And polls within the industry confirm that. For example, a poll from Munich Re US found that a majority of insurance company risk managers are worried about potential claims against their firms in the wake of drone use.

So how can risk managers feel comfortable about insuring drone operators? As with all other technological advances, a combination of new technology and government regulation will provide the tools for business to use drones for the benefit of their organizations and customers—with regulations setting the legal limits for liability, so that insurers can tell drone-operating clients what they need to avoid.

Government is generally more conservative than business, but in this case government gets it. Writing in The Hill, U.S. Transportation Secretary Elaine L. Chao applauded the use of drones to help with assistance and recovery in the recent storms. “’Drone crews were deployed by communications and utility companies to rapidly and safely assess damage to cell phone towers, power transmission lines, pipelines, roads, and railways,” wrote Chao. “Insurance adjusters discovered that drones allow for more efficient and safe property inspections, especially in flooded areas. Drones let them check roofs without climbing ladders, and make surveys faster and less expensive.”

Michael Huera, head of the Federal Aviation Authority, wrote in a recent blog post that “You only have to look at the recent flooding in Texas after Hurricane Harvey to see what a transformative role that drones are playing. I don’t think it’s an exaggeration to say that the hurricane response will be looked back upon as a landmark in the evolution of drone usage in this country.” And in a new executive order, President Trump asked aviation authorities to “further integrate” drones into the skies over the U.S. The order instructs officials to develop new guidelines “to promote the safe operation of unmanned aircraft systems (UAS) and enable the development of UAS technologies for use in agriculture, commerce, emergency management, human transportation, and other sectors.”

Business is on board, too. A report by Goldman-Sachs says that business and government (especially private government contractors) will have spent some $13 billion on drone tech by 2020. The biggest opportunities are in construction and agriculture, but the drone revolution is just beginning. “Current drone technology has already surpassed manned aircraft in endurance, range, safety and cost efficiency—but research and development is far from over,” says the report. “The next generation of drones will widen the gap between manned and unmanned flight even further, adding greater stealth, sensory, payload, range, autonomous, and communications capabilities.”

But the insurance industry has yet to be convinced. The Munich Re US poll shows that 61 percent of insurance firm risk managers “are concerned about the potential for invasion of privacy.” Other concerns include the possibility of a firm being liable for personal injury due to accidents involving drones, inadequate insurance on the part of drone operators, and property damage from errant drones. In a 2015 report, insurance giant Lloyd’s says that “the potential of drones is hard to deny. However, concerns around safety, security and surveillance could pose significant risks to users of this nascent technology. This is, of course, true of many emerging technologies. However, drones are expected to receive particular scrutiny because of the technology’s military heritage and surveillance capabilities. Adequate insurance coverage will likely be of particular importance to protect users against emerging risks.”

That report lists five areas of concern among insurers—three of them relating to regulations. “A robust regulatory framework is expected to be crucial to the provision of insurance for drone operations,” the report notes. In addition, “the industry is growing too rapidly and unevenly for regulators to provide strong oversight without technological support”—an issue that will likely require specific guidance from regulators. And, in the case of privacy infringement, “perhaps the most cited public concern about drones,” key requirements for insurance “are expected to include the completion of privacy impact assessments, and compliance with applicable regulations and laws.”

The President’s Executive Order realizes this as well. “To promote continued technological innovation and to ensure the global leadership of the United States in this emerging industry, the regulatory framework for unmanned aircraft systems (UAS) operations must be sufficiently flexible to keep pace with the advancement of UAS technology.” A three-year program will allow local and federal authorities to “test and evaluate various models of State, local, and tribal government involvement in the development and enforcement of Federal regulations for UAS operations; encourage UAS owners and operators to develop and safely test new and innovative UAS concepts of operations; and inform the development of future Federal guidelines and regulatory decisions on UAS operations nationwide.”

Regulation, of course, will be driven by technology, and the technology to ensure safe use of drones is there—or nearly there. For drones to be used on a commercial basis, they need to be capable of autonomous navigation, based on technologies such as machine vision, sensor tech, cameras, and communication capabilities. Using machine vision tech, drones will be able to use cameras to electronically “see” what is around them, enabling them to take evasive action when they are about to hit something, or are veering into an area they are supposed to stay away from. Using sensors, drones will be able to detect obstacles and change course when needed. And with advanced communications technology, operators will be able to lay out routes for drones, ensuring that, like airplanes, they each fly in their own air routes, in a grid that allows each safe passage through the skies.”

Once that technology is integrated into drones, they are likely to get a green light from government regulators—and from insurers. “Insurance is expected to be a key component of the risk management framework that will need to be developed for the systems to operate safely and with due regard for third party interests,” says the Lloyd’s report. “Drones have the potential to enhance a significant range of activities. However, manufacturers, operators and regulators will need to work together, on a global basis, to ensure this technology is used safely and responsibly.”