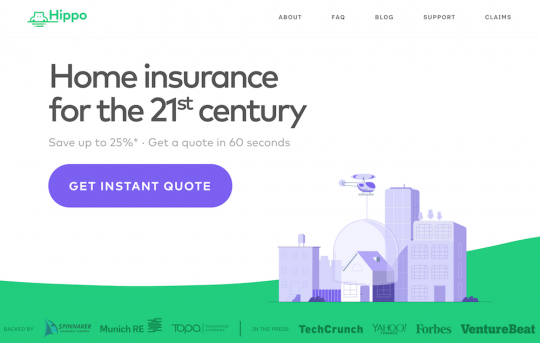 Hippo, the Mountain View, Calif.-based InsurTech touting a transformation of homeowners insurance through the use of emerging data sources and processing, has raised $25 million in Series B funding, led by Comcast Ventures (San Francisco) and Fifth Wall (Venice, Calif.), and joined by other top fintech investors. The company intends to expand nationwide during 2018. Hippo reports that infusion of new investment funding will support several expansion and development initiatives planned for 2018, including opening a new customer service center in Austin, Texas, that will serve as the hub for Hippo’s claims advocate concierges, along with its insurance operations teams. “Hippo is reimagining homeowners insurance with a customer-centric model, built from the ground up,” comments Assaf Wand, CEO and co-founder, Hippo. The company employs sources of data such municipal building records, and emerging technology capabilities, such as satellite imagery and smart home devices, to streamline the quote and onboarding experience, in order to deliver quotes in under 60 seconds and sign-up in under three minutes.

In a statement on the series B funding round, Hippo explains its approach by noting that innovation in the insurance industry has trended away from services with a human touch and toward bots that attempt to supplement all customer interaction. Recognizing the stress involved in a deeply personal event that triggers an insurance claim, Hippo says it takes a different approach, providing homeowners with a claims concierge, whose sole responsibility is to assist them all the way through to the final settlement. Through its exceptional technology and customer-first approach, Hippo provides ongoing value to customers with continuous communication and home monitoring, suggesting proactive steps to address problems that might lead to a loss.

“Homeowners insurance is an antiquated industry that has lost its way,” adds Wand. “Up to 65 percent of all homeowner claims result from catastrophic events. Whether it’s damage from a hurricane or wildfire, the last thing homeowners should have to deal with is a complicated battle with their insurance carrier. We get our customers what they need immediately, so the claims process doesn’t become another crisis they have to deal with.” Hippo’s “smart home insurance policies” offer what the distributor calls more comprehensive coverage for today’s homeowners while cutting premium costs. Hippo’s says its insurance offering addresses the problem that over 60 percent of U.S. homes are underinsured, with policies that fail to cover many of the home’s most valuable assets. Hippo says it has eliminated process inefficiencies and outdated policy provisions to offer better and more relevant coverage.

“More and more complex financial purchases are being made online, yet the insurance industry has fallen short of providing homeowners with a digitally delivered product that provides the quality of service consumers deserve,” comments Sam Landman, managing director, Comcast Ventures. “We invested in Hippo because the team is executing against their vision to build a more modern, consumer-focused product with proprietary internal tools that we believe will create a sustainable operational advantage.” Since its launch in California in April 2017, Hippo has expanded to Arizona and Texas. Hippo says it will continue expanding its reach to additional states throughout the year and is aiming to reach 60 percent of the U.S. population by the end of 2018.