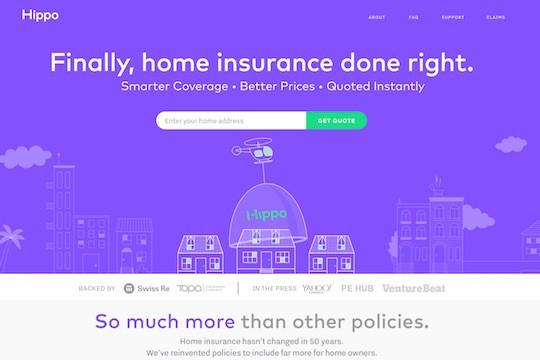 Hippo Insurance, a Mountain View, Calif.-based insurance distributor has opened for business in its home state. Founded in 2015, the company raised over $14 million from a funding round in Dec. 2016. Hippo characterizes its offering as a “vastly more protective product,” better suited to homeowners’ needs, more transparent in its coverage, and able to be purchased instantly online at lower prices. The company offers homeowners and condo insurance and partners with TOPA Insurance and Swiss Re as carrier and reinsurer, respectively.

“It’s a rewarding moment,” comments Assaf Wand, CEO, Hippo CEO. “When you look at home insurance you see that 60 percent of US homeowners are underinsured, many believe they have coverage that isn’t actually in their policies, and the majority spend too much time and money purchasing the product, due to outdated commissioned agents and various hidden fees.”

Hippo’s offering is the result of an analysis of home insurance with an eye to what could be improved. The company added ten features not included in standard policies, searched for ways to reduce unnecessary or hidden costs, and adopted technologies to create what it asserts is the fastest online purchase process, according to a company statement.

Hippo says its quote process can be completed in 60 seconds—as compared with other insurers’ boast of completing a quote in 15 minutes. Acknowledging that most policies will be sold over the phone, the company says that its customers can complete the purchasing process online with just a few more steps.

One of the aspects of Hippo’s redesign is altering available coverages to better match current needs. For example, Hippo has removed coverage for what it calls “antiquated” items such as pewter bowls and stock certificates, which feature in traditional policies. Instead, Hippo’s policies provide increased coverage for possessions such as computers, appliances, electronics, home office equipment and other items more likely to be owned by today’s consumer. To address what Wand characterizes as a chronic underinsurance problem, Hippo insures the full replacement cost of protected property rather than the lower, depreciated value that many insurers cover. Owing to its effort to reduce unnecessary costs, Hippo says its enhanced policy protections could cost as much as $300 if bought through other companies—in the case where the desired coverages are even available.

From Protection to Prevention

Hippo reports that it has devised a strategy to help policyholders avoid losses, using “smart-home” sensors. So far this only involves giving policyholders free water leaked detectors, which is comparable to other insurers preliminary forays into IoT-driven loss prevention.

“InsureTech digital distributors like Hippo continue to bet on their abilities to appeal to insurance buyers with better, more intuitive buying processes,” comments Matthew Josefowicz, CEO, Novarica. “Launching is great, now the question is how much resource they can devote to customer acquisition.”