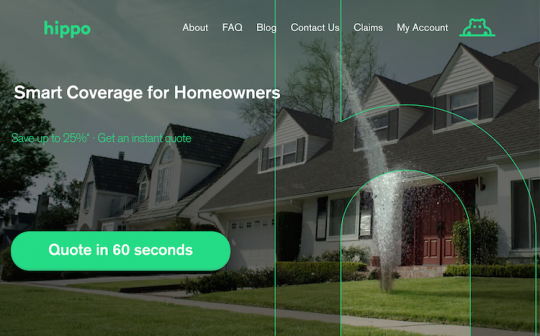 Hippo reports that the financing will be used to fuel the expansion of its geographic footprint to more than 80 percent of the U.S. homeowner population by the end of the year, broaden Hippo’s direct-to-consumer product portfolio, and grow the company’s distribution network of industry partners. Hippo says the investment round builds on a record twelve months for the company, which it reports has seen premiums grow more than 10 times.

“We launched Hippo to transform the outdated and often frustrating relationship people have with their home insurance provider into one that’s approachable, modern, and always adding value,” comments Assaf Wand, co-founder and CEO, Hippo. “Not only are more than 60 percent of US homeowners underinsured but traditional insurance only interacts with you when you file a claim. We’re providing more comprehensive policies and helping customers prevent claims from ever happening through protective services, programs and alerts that safeguard their homes, a family’s largest personal asset.”

Hippo describes its mission as building faster, more accurate and more affordable homeowners insurance for today’s customers. The company employs data-driven pricing and real-time underwriting, which it says analyzes public data sets, ranging from municipal building records to satellite imagery of physical property characteristics, with the aim of developing a more accurate profile of a customer’s property. The result is that qualified customers receive a comprehensive, tailored and accurate quote in under 60 seconds, and reduced premium costs of up to 25 percent, according to Hippo.

Hippo also provides customers with complimentary smart home devices, to protect homeowners against water leaks, fire damage and break-ins. The company says the devices have been well-received by clients, with a more than 70 percent installation rate to date. Hippo attributes what it calls a customer-centric and preventative approach to its having earned an average Net Promoter Score of 76—nearly three times the industry average. “Hippo has emerged as one of the highest growth companies we’ve seen among its insurance peers and more broadly in FinTech,” comments Noah Knauf, General Partner, Bond. “The Hippo team is world-class and we’re excited to partner with them as they build the next-generation insurance company.” As part of the investment, Mr. Knauf will join Hippo’s Board of Directors.

In addition to Hippo’s direct-to-consumer and insurance industry partners, Hippo has built a partner distribution network that includes homebuilders, such as Lennar, lenders like Better.com, homeowner insurers like First American Property & Casualty Insurance Company and key brands within the Connected Home like Xfinity. As part of Hippo’s partnerships with homebuilders, some newly constructed homes will have builder-installed smart sensors that help reduce the ongoing maintenance costs, which can help save customers more on their insurance premiums over time.