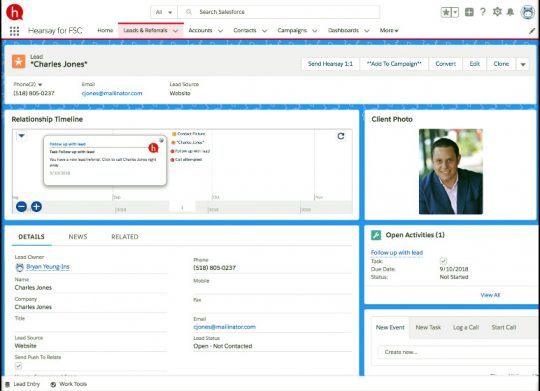 Hearsay Systems, the San Francisco-based provider of the Hearsay Advisor Cloud for the financial services industry, has announced the general availability of its Advisor Actions mobile solution, which enables financial advisors and insurance agents to connect their mobile devices to CRM, business intelligence and other systems and receive action triggers. “Even though its 2018, insurance is still plagued by manual processes that are frustrating for to agents and their staff, and for end customers,” Clara Shih, CEO, Hearsay Systems, told Insurance Innovation Reporter. “Even here in Silicon Valley, agents spend over two-thirds of their day manually reaching out to customers.”

In the course of these activities agents will typically log into multiple systems, including portals, billing and CRM systems. After checking events in appropriate systems, agents will then phone clients, often leaving voice mail messages, according to Shih. Hearsay conducted time-and-motion studies and found that experienced agents could process 20 to 25 of such interactions daily, consuming a great deal of time and often making redundant effort that still fail to bear fruit. Standardization and Consistency without Losing the Human Touch

Advisor Actions is designed to significantly increase efficiency by enabling a single portable device with a single interface to back office systems. Additionally, Shih explains, the application frees agents from tediously creating a routine and instead presenting timely actions that need to be taken, in an appropriate manner and sequence in order to deliver standardization and consistency without losing the human touch.

“We know what the triggers are—for example, leads, overdue bills, natural disasters—and so we know when we should trigger human staff interaction with a policyholder or prospect,” Shih comments. “We mapped out these processes and pre-scripted what we think is the optimal ways to reach out.”

Among Advisor Action’s structured processes are methods for lead conversion and cross selling, including the alert and call capability and language agents can use. Agents have the last say, according to Shih, and the application’s machine learning will pick up and incorporate their edits. “This is the 21st century way agents should be working and consumers need to be treated.  “Agents often take multiple days to follow up with high-intent prospects—that’s not acceptable. We shift the modality, and the agent gets the trigger to call—‘Charles is expecting a response; click to call now.’”

Advisor Actions are enabled by Hearsay’s new Action Card API, which allows for the creation of custom action cards with prescriptive next steps that can trigger any workflow from any core system. Every Hearsay activity included in the workflow is then automatically tracked and captured into Hearsay’s reporting and analytics. Optionally, activities can be automatically synced with any CRM, including Salesforce Financial Services Cloud, without any manual data entry by advisors.

In addition to the efficiency Advisor Actions makes available to agents, it also provides transparency into how they are treating a company’s customers, providing real-time insights into advisors’ activities, including what’s working or not, and what’s not being followed up on. “Having been in this field for many years and connected with clients every day, I see that very little has changed in financial services distribution,” comments Dewey Bushaw, EVP, Retirement Solutions Division, Pacific Life Insurance Company. “Delivering important cues to sales reps where they are—which is on their mobile phones—and guiding them with the right actions at precisely the right times, Hearsay Advisor Actions has the potential to completely transform field distribution. For corporate leaders, this means unprecedented field productivity and increased visibility into the actions of every rep that automatically sync to the core CRM system.”