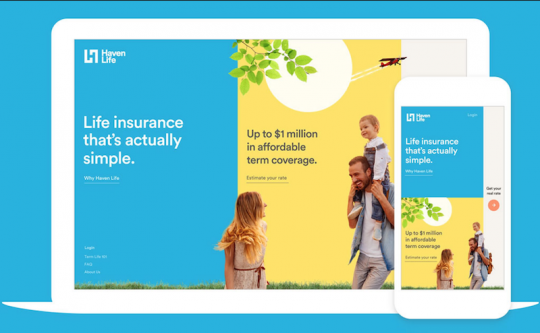 Haven Life, the New York-based life insurance online, direct distribution startup owned by MassMutual (Springfield, Mass.), has reached the third anniversary of its debut on the market. Haven Life CEO Yaron Ben-Zvi marked the milestone by noting that the company had seen a 250 percent increase over the past year (April 2017 to April 2018) in the number of policyholders for the agency’s Haven Life Term policy, underwritten by the parent company. He also noted that 70 percent of Haven Life’s customers are comfortable enough with the application process to complete it without reaching out to the company’s support team. Ben-Zvia also reported that Millennial women who buy the company’s term policy select coverage of 7.9 times their annual income, and men 6.8 times. Insurance Innovation Reporter has been following Haven Life’s trajectory, as what we see as an important digital distribution play by a major life insurer. We thought the anniversary was a fine opportunity to reconnect with John Latona, the company’s General Manager, with whom we’ve interacted in the past.

Insurance Innovation Reporter: John, tell us a little bit about Haven Life came about and what it was trying to achieve.

John Latona, General Manager, Haven Life: Haven Life came out of our Yaron’s experience as a consumer buying life insurance. He had founded several startups and was shocked at how difficult and long the life insurance purchasing process was. In his thinking about it, he bore in mind that this is one of few products where you don’t know if you’ll get the product at beginning of process or how much it will cost. MassMutual recognized this was an area that needed development and work, and so the challenge in year one was whether we could build a transactional platform for selling life insurance.

IIR: The three-year anniversary is to the date when Haven Life launched in the market, in May 2015. When did the initiative to create the distribution platform begin, and what were the objectives?

JL: The project started in March 2014. Yaron’s challenge was how to create an experience for this product that people should have—individual life insurance—but the purchasing of which has declined since the 1960s. The opportunity was to turn that around, using technology to create a purchasing experience that was as easy and frictionless as possible. Our mission hasn’t really changed, and I think the progress we’ve made has been noteworthy. We faced a challenge early on because this is not just about changing the purchasing experience but also about changing the relationship between insurance company and customer, but we’ve started to make traction in that area as well.

IIR: Tell us about some of the progress with regard to customers and the markets you serve.

JL: When Haven Life launched, we could only sell a policy to someone up to age 45. We’ve been able to extend that to age 65. We started offering the term life product in Massachusetts and have since opened up to all the states, the final one being California in Sept. 2017.

IIR: What are some of the improvements Haven Life has made since opening for business?

JL: We’re an Agile shop and constantly making improvements. One of our more important improvements recently was our Oct. 2017 redesign to improve transparency and ease for the consumer. For our Instant Term—our expedited underwriting process which enables some people to get a policy without a medical exam—we’ve reduced an application that had 60 to 80 questions to about 27 questions. Using reflective options, we’re able to ping data sources and ask follow-up reflective decisions and get a decision instantly.

We have also is refined prescription history. To illustrate, Zofran, an anti-nausea medication, could be prescribed to pregnant women, cancer patients or people with ear infections. Depending on which, it may have implications for underwriting a policy, and figuring that out creates friction in the process. To address that, we ask reflexive questions in real time in response to someone telling us that they’ve taken a given drug. In the case of Zofran, if we ask why it was taken and the answer is, “I was pregnant,” we know we don’t have to stop the process at that point. We’ve done that with a number of drugs.

IIR: You mentioned the challenge of changing the relationship between insurance company and customer; could you elaborate?

JL: From day one we recognized an opportunity not only to make process easier, but to engage consumers. We have no illusions that we’ll be a lifestyle brand, but at same time, there needs to be perhaps more personal relationship for someone you’re counting on to take care of your family if you’re not around to do it. That’s always been in our DNA but we’ve been limited to our ability to execute. One of the things we did is to launch an app not for insurance processes, but that would individuals in 911 situations to make it much easier to call and translate exactly where they were from their smart phone. We give away to anyone who wants it, not just policyholders. You could call that the first dip of our toe into the water, as to how we bring more engagement to consumers. We’re happy with that initiative, which launched in Oct. 2017.

IIR: What would you say in general about how the Haven Life experiment—if I can call it that—is working out? How are you doing?

JL: I think we’re doing great. From the past year to the three year we grew 250 percent. We’re growing from a staffing perspective. I was the number 3 employee and we’ve grown to 140! I think the innovations we’ve developed to do all these things, and we’re finding more uses within MassMutual as well. So yes, we were founded to serve the self-directed customer, but the innovations we’re developing are going back into MassMutual.