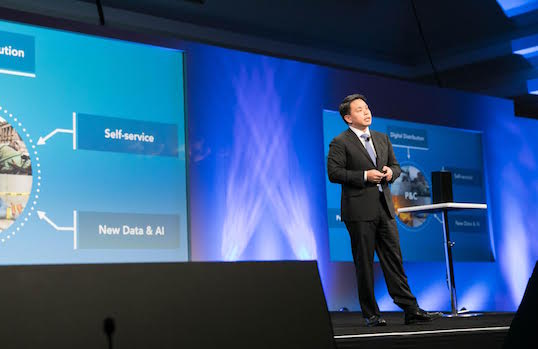 During his keynote at Guidewire’s 12th annual Connections user conference, CEO Marcus Ryu declared the company’s aspiration to create an “industry standard platform” for the property/casualty industry, during an address that explored the challenges and opportunities faced by the vendor’s customers. Ryu’s remarks were timed to the latest release of Guidewire Insurance Platform, which he characterized as “the work product of the largest software engineering organization in the world dedicated exclusively to P&C insurance.”

Ryu related the story of colonial Dedham, Mass., where settlers collaborated to ameliorate the resource-intensive process of grain grinding. An entrepreneurial settler saw that the elevation difference between the Charles and Neponset Rivers—which were within a mile of each other—could create a stream powerful enough to turn a waterwheel. The settler convinced competing farmers to join him in digging a three-quarter mile canal to connect the two rivers.

“It is our argument that the P&C industry needs a similar division of labor,” Ryu commented. “Like that watermill, we believe what is called for is a new industry-standard platform on which each insurer can re-define its identity and differentiation for this brave new era.”

Ryu identified the vendor’s guiding design principles over the course of his address, elaborating on how an industry-standard platform must:

Reviewing Guidewire’s range of products, which include core policy administration, billing and claims systems, plus ancillary digital and data and analytics offerings, Ryu referred to Guidewire’s recent acquisition of FirstBest, provider of a property/casualty underwriting management solution focusing on the workflow and data needs of underwriters of complex risks. “This component is a perfect example of how the suite must not only replace legacy systems, but also provide a decision and collaboration workspace for the insurance knowledge worker,” Ryu commented.

Core Systems Are No Longer Enough

While legacy core system replacement has been Guidewire’s chief mission for most of its 16-year existence, core systems are no longer enough, Ryu insisted. “The current era requires, first, surrounding the core with data and digital functions into one unified source of truth; and, second, rendering this source of truth accessible to internal and external parties,” he said.

In achieving its aspiration, Guidewire has abundant development work to do, it is some distance from achieving a critical mass of industry users, Ryu acknowledged.

Ryu noted that the firm’s first stride toward a goal of an open marketplace for vendor partners was last week’s launch of Guidewire Marketplace. “Marketplace is where we will curate and deliver regional, line of business, and regulatory content, productized integrations, and—in the future—third-party applications,” he said. “One of the measures of our progress as an industry standard will be how many partners see the value of enabling themselves through Marketplace.”

Achieving the delivery of a full insurance platform remains an elusive goal, due to the range and variation of functionality across the global insurance industry, Ryu argued. “However, while it’s difficult to deliver an entire P&C core system suite in SaaS form, in the meanwhile it’s very natural to deliver select functions as SaaS,” he said. “We’re doing this today with cloud-based services such as Guidewire Live and Spotlight, document production with our partner Smart Communications—as well as our new offerings for Underwriting Management and Predictive Analytics.”

With regard to driving down TCO, Ryu explained that it involved a step beyond Guidewire’s traditional task of building “software that works.” “To merit the title of an industry-standard, however, we must meet a higher bar: our platform must deliver returns to scale,” he said. “It must reward its adoption by becoming more complete, more capable—and less expensive. This has been true of every winning platform or standard in technology history.”

“For this reason, starting in earnest last year, we have made reducing the total cost of ownership of InsurancePlatform a top level goal for the company,” Ryu continued.

While Guidewire anticipates that reducing TCO will be very difficult, Ryu cited several options by which the firm can pursue the goal, such as delivering new functionality as cloud-based services for rapid implementation; industrializing the development of product, regulatory and bureau content; and continuing to refine the company’s methodology and tools to drive more decisive and efficient implementations.