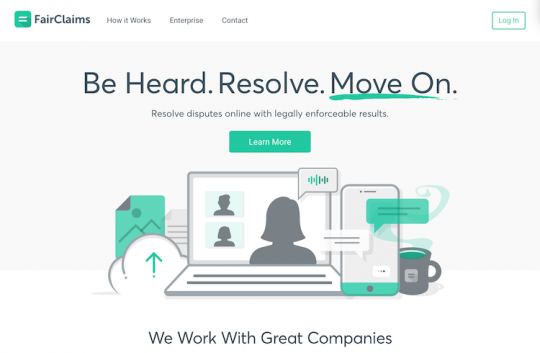 Greenlight Re Innovations, part of Greenlight Capital Re, Ltd., a specialist property and casualty reinsurance company headquartered in the Cayman Islands, has announced that it has made a strategic investment in FairClaims, a Los Angeles-based online insurance and consumer dispute resolution startup. Greenlight Re declined to specify the amount of investment. FairClaims has developed an online system that educates, empowers, and engages claimants to drive settlement via negotiation and mediation, according to Greenlight Re’s announcement. Insurers benefit significantly from FairClaims by reducing claims litigation, improving their customers’ experience, enhancing trust and strengthening their Net Promoter Score, the company says. Greenlight Re adds that, through FairClaims’ online mediation and arbitration platforms, claims can be resolved in a dramatically shorter time frame than through traditional routes, benefitting all parties involved.

“The U.S. property and casualty insurance industry alone spends nearly $30 billion annually to defend claims,” notes Simon Burton, CEO, Greenlight Re. “It is widely recognized that current methods for resolving insurance disputes in the US are time-consuming, inefficient, and expensive. FairClaims is a technology-driven solution to this problem that delivers real benefits to all stakeholders in the claims process. We are very excited to partner with Stephen Kane and the FairClaims team on their vision for improving the claims experience.” Greenlight Re’s investment will allow FairClaims to accelerate its expansion into the insurance industry, according to Stephen Kane, the company’s founder and CEO. “Consumers and insurance companies alike benefit from increased transparency and greater efficiency in claims resolution. And while carriers are quite experienced at handling claims, our platform empowers consumers to directly submit and manage their own claims while feeling heard. As a third party, neutral dispute resolution platform we provide an alternative to litigation for claims. We hope this means more consumers can get a fair settlement more quickly while insurance companies benefit from shorter cycle times, less overhead and more brand affinity.”

FairClaims is the sixth insurance technology business that Greenlight Re Innovations has invested in since it was set up in March 2018.