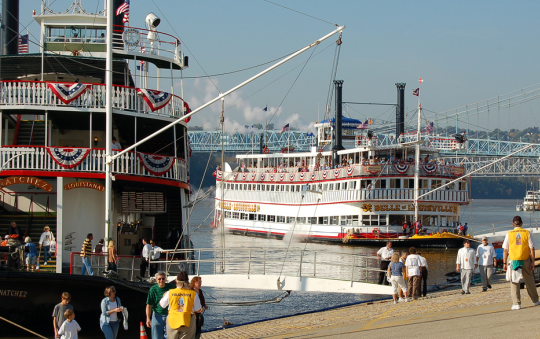 (Riverboats The Belle of Louisville and the Natchez at the annual Tall Stacks event in Cincinnati, home of Great American Insurance Group. Photo credit: Bryce Mullet.) Niehaus joined Great American in 2007 as divisional assistant VP within its Annuity Group. Since that time, he has held roles of increasing responsibility and was promoted to senior VP and CIO of the Annuity Group in 2010. Prior to joining Great American, Niehaus served in leadership roles at Procter & Gamble and Hewlett Packard.

(Related: Innovation as a State of Mind: Transformation Owes More to People than Technology)

Singh held the CIO position at Great American for nearly 10 years, during which he time successfully led a large-scale transformation of the company’s operational platform and has influenced its philosophy of doing business. He started his IT career in 1988 as a consultant with Citicorp Overseas Software Limited. He has also worked with ANZ Banking Group and Price Waterhouse’s Management consulting Services group. Prior to joining Great American Insurance, he was CIO of Peoria, Ill.-based P&C carrier RLI.