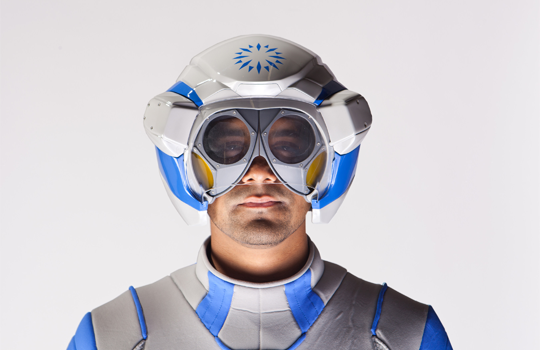 In the latest example of an insurer creatively increasing awareness about future-needs planning, Genworth takes the palm with the debut of its Genworth R70 age-simulation suit. Specifically designed to raise awareness about the need for long-term care planning, the suit is designed to educate the (presumably not-already-elderly) public on the physical effects associated with aging. Genworth R70, the carrier says, provides consumers with a powerful experience, allowing them to understand and empathize with what it feels like to grow old.

The suit was, unveiled this week at the Social Innovation Summit in Silicon Valley, California, was created in association with Hollywood special effects studio Spectral Motion (X-Men, Hellboy), costume designer Erin Benach (Drive, Place Beyond the Pines and Midnight Special) and illustrator Christian Cordella (Captain America, Iron Man 3, 300: Rise of the Empire). The “70” in the name refers to the fact that 70 percent of Americans will require long-term care after the age of 65.

Of Course It’s a “Stunt”

Genworth R70 is a stunt – just as was Prudential’s “Dominoes” stunt which illustrated the geometric effects of retirement savings – but spectacle is often required to demonstrate what is not immediately obvious. People shy away from thinking about the long-term future – their present concerns are burden enough. Nor do they want to dwell on the possibility of future disability or untimely death. Furthermore, we wrote in our piece on Dominoes and the problem generally, people don’t understand insurance and they understand other complex retirement planning instruments even less. People understand patterns and other sorts of illustration better than abstract mathematical formulae – which is why, for example, there is such a vogue in data visualization techniques among business people.

Put another way, if insurance companies want to grow, they need to find creative ways of increasing public awareness. There is a vast population of under-insured consumers, and perhaps the greatest lever to correct that problem is to make their true exposure more real to them. The way Genworth R70 does that is by simulating the following afflictions (click on the image below to enlarge):

To ensure that these aspects of age simulation were accurate, Genworth consulted with Dr. Edward Schneider, dean emeritus/professor at the University of Southern California’s Leonard Davis School of Gerontology.

Genworth R70 can help families broach the topic of long-term care, breaking through embarrassment about a very sensitive subject matter suggests Tom McInerney, Genworth’s president and CEO. And of course it also provides a lively sense of future needs of middle-aged children themselves who are trying to have “the talk” about elderly care with their parents and to even younger adults – all of whom face the same future in the best of cases.

“Many young adults often feel invincible to the physical changes and challenges that aging can present,” McInerney comments. “We are proud to introduce the Genworth R70 to help encourage Americans to think long term, become more sensitive to aging issues, and start discussions about long term care plans for themselves and /or loved ones.”

Genworth plans to use the R70 age simulation suit throughout 2015 as a tool to continue educating the public on the effects of aging and, additionally, as a sensitivity training tool with employees. The static graphic below illustrates how the suit works, and the video embedded immediately below not only tells the story of Genworth R70’s creation, but also shows the suit in action.