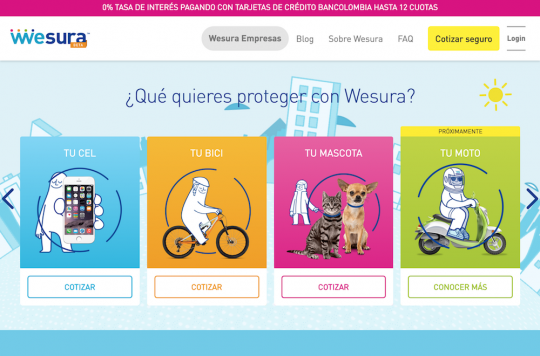 Jorge Enrique Gómez Vásquez led the 2016 launch of Wesura (pronounced with an English “We,” the company is owned by Grupo SURA, Medellín, Colombia), Latin America’s first P2P insurance play, based on developing insurance communities derived from social networks. The company, for which Gómez serves as CEO, was winner of a 2017 Celent Model Insurer Award for Innovation and Emerging Technologies.

Wesura was launched as an evolutionary step in the way Sura markets products and services and the way that its customers experience purchase, payment and claims. The company operates on an internally developed core system, providing a digital customer experience, including policy changes and renewal, for customers seeking insurance for a variety of personal risks including auto, motorcycle, smartphone and pet. The digital process covers the entire insurance value chain, from purchase through renewal, modification of policies and claims. The process is entirely paperless and available 24/7 on the platform.

“We are focused on developing highly concurrent applications, under the principles of the Reactive Manifesto and actor-based modeling,” comments Gómez. “This enables the implementation of event-oriented functionalities, supported by  cloud-based infrastructure that guarantees the availability and scalability of the platform at all times. Technology allows us to have fully automatic processes, transparent and without intermediation, easy adoption by customers, allowing us to reach large audiences.”

Wesura has set the objective of reaching 200,000 policyholders by the year 2021, according to Gómez. Initiatives directed to the goal fall under three strategies internally referred to as TCM: the generation of Traffic, improvement of the Conversion rate, and increase of Margin. Through its digital direct marketing campaign, the company met its growth goals set at the Sept. 2016 launch, managing to generate 742,709 visits to its website, accumulating nearly 5500 new policy sales, with a conversion rate of 0.74 percent.

Gómez describes his leadership philosophy as one of empowering teams, giving them confidence to execute, encouraging self-training and interaction with other teams to understand each one’s relevance to the overall program of work. “We seek to execute not only with speed and efficiency, but while making sense of the execution, and planning of our work in such a way that the team members understand and recognize the importance of the contribution of their work to the team and thus the individual and group performance is maximized,” Gómez comments.