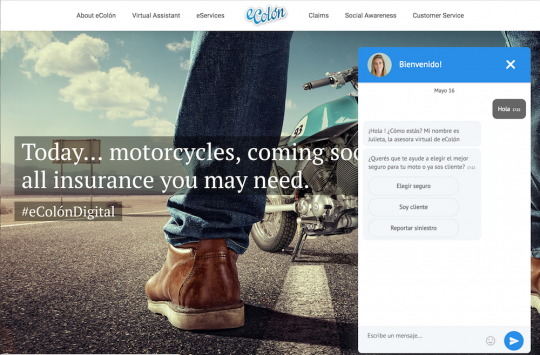 To imagine what can be, it is vital to understand what is and has been. During his career of over 30 years, Eduardo Iglesias, CEO of Colón Seguros (Buenos Aires) has held leadership positions in banking as well as life and property/casualty insurance; he has worked and studied extensively in both Argentina and the U.S., and he has followed up his work at firms such as The First National Bank of Boston, MassMutual (Springfield, Mass.) and SGM Life (Buenos Aires) with venture activities as both capitalist and company founder. In 2012, he combined his business experience and technology interest to found Colón Seguros, and he has used the company as a platform to launch Argentina’s first fully digital insurer, eColón. Many insurers have struggled to find ways to institutionalize innovation; Colón was built as an innovative organization. The company’s operating philosophy is to use the exponential organization theory of Salim Ismail. Consequently, Colón constantly interacts with a large number of technology startups that serve as a source of innovation across relevant business areas, including marketing, IT, customer experience and social media.

“To launch eColón we coordinated a collaborative effort among five different startups and the Colón team,” Iglesias relates. “In total, it involved a smooth synchronized implementation process among 42 interdisciplinary professionals from those six companies, including software factories specialized in A.I., in ecommerce, graphic designers, customer experience specialists, a digital advertising agency and a communication agency.”

Iglesias managed the eColón project from February to November 2017. The effort began with a 45-day period to analyze and define the new business model, using the Canvas business model template, design thinking and customer discovery methodologies. The Colón team then spent another 45 days selecting consultants and startup companies that were to build the IT Infrastructure, marketing campaign, and social media strategies, brand strategies, etc. The last five months were dedicated to software implementation, and integration with chatbots, the e-commerce platform, and payment gateway platform. The team dedicated a month to testing prior to launch.

Following a preliminary launch on Nov. 6, 2017, eColón provided a fully digital insurance customer experience with its second phase launch on Nov. 24. The centerpiece of eColón’s digital customer experience is Julieta Bot, a virtual assistant who guides customers through every stage of the insurance ownership process from quoting and binding to requesting documentation, making policy changes and filing a claim.

eColón launched with a model designed for profitability: it markets directly through social media, it sells and services directly eliminating costs, and it debuted on the market with third-party liability for motorcycles—a mandatory product by law in Argentina. Colón plans to introduce homeowners and pet insurance during the first half of 2018, followed by travel and life insurance later in the year.

“By focusing in a simple product, motorcycle liability, Colón was able to design—in a very short period of time—all the elements of the customer journey using an agile UI and process that enables to purchase insurance in 90 seconds assisted by a chatbot if needed,” comments Juan Mazzini, Senior Analyst, Celent. “Similar agility and customer experience is offered in the claims process.”

The velocity at which Colón rapid deployed its eColón digital direct channel is better understood as a qualitative achievement than a quantitative one, in Mazzini’s view—it’s an expression not merely of an insurance company working faster than usual but rather of the behavior of a company that sees itself not just as an insurance company but as an InsurTech.

“This is something you perceive when you speak to their senior leadership and that you can feel permeates as part of their culture,” Mazzini observes. “And as an InsurTech, they understand the importance of technology and agility, but they also recognize the extreme importance of re-thinking the business as the driver for innovation.”

As an Argentine company Colón wasn’t content to offer what was merely an improved version of what already was being sold online in this market; instead they benchmarked their initiative to others from around the world, according to Mazzini. “The result is e-Colon, the stepping stone for them to offer new digital insurance products, while continue improving their technological and analytical capabilities to better understand and serve their customers.”

Iglesias has his work cut out for him at eColón in launching new product lines and marketing the company within and beyond Argentina. However, he is also deeply engaged in efforts beyond Colón Seguros’ doors. He is currently working to promote an InsurTech ecosystem for Latin America, and has embarked on an initiative to drive Insurance Inclusion in Argentina, a principle whereby all individuals can have access to insurance regardless of whether they live in an urban or a remote rural location.