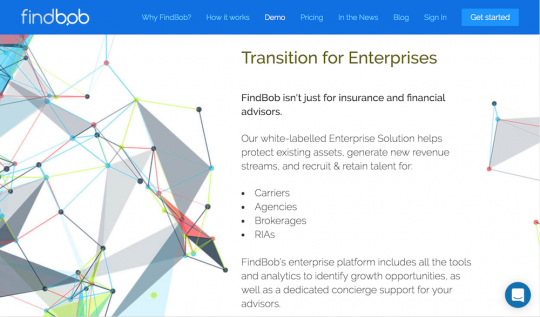 FindBob, a Toronto-based provider of transition management platforms for the financial services industry, has secured $1.64 million USD in a seed round, according to Crunchbase. Grinnell Mutual (Grinnell, Iowa) led the investment. Other investors included MaRS Investment Accelerator Fund and Ames Seed Capital (Ames, Iowa), with follow-on investment from the Global Insurance Accelerator  (Des Moines, Iowa) and Canadian and U.S.-based angels, according to a FindBob announcement. The company says the capital will allow it to grow its sales and marketing teams, expand into additional U.S. markets and execute on its product roadmap. “We have an incredible opportunity to make a meaningful impact on one of the industry’s biggest threats which is the lack of continuity within financial services,” says Roland Chan, CEO, FindBob. “Insurance and financial advice matter, and by aligning the interests of advisors, agents and their companies through the effective use of digital transition management platforms, we’re helping orchestrate growth and perpetuation like never before.”

FindBob reports that it supports some of Canada’s largest life insurance and mutual fund distributors in their book of business transitions through what it calls its robust enterprise platform. “We’re much more than just a marketplace,” Chan comments. “Our enterprise platform leverages data to identify and develop talent necessary to improve organizational strength. So, while firms focus on today’s business goals they can rely on us to provide visibility into their producers’ transition needs and offer them tools to support future growth.” “There is a large market for transition assistance in many personal services industries,” comments Dave Wingert, executive VP, chief operating officer and acting president, Grinnell Mutual. “Because of an impending generational shift of wealth coming—the largest ever—providing business and transition advice and networking opportunities to those personal service businesses will fill a critical need and help them stay viable. Grinnell Mutual is excited to have the chance to support that kind of initiative in a rapidly expanding market.”

The average age of the North American independent producer is 59 years old, with over $2.5 trillion in AUM (Assets Under Management) controlled by producers in their sixties. Eighty percent don’t have transition plans and no next-generation talent to take the reins, according to a FindBob statement.

“We have a responsibility to uphold the promise to consumers that we’re building practices of endurance that will survive their principal’s career and be there when the consumer’s business or family needs them most,” Chan adds. “FindBob is the innovation that allows firms and advisors to collaborate to ensure continuity and growth in an industry that we love so dearly.”

Slice Raises $11.6M Series A to Scale for New Products and Jurisdictions