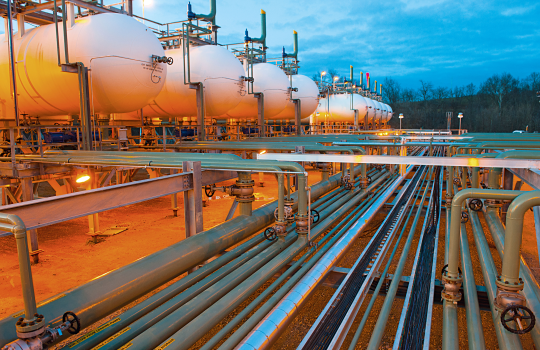 In the previous articles we discussed how fiber optics can reduce losses in the food industry by monitoring the temperature of refrigeration units and in the natural gas industry by detecting the conditions leading to gas leaks in pipelines. The entire fiber length acts as the temperature or vibrations sensing device, allowing for a high level of flexibility in configuring the monitoring system. Localized temperature changes can also identify the exact location of a liquefied gas leak in a containment vessel and, combined with fiber optic gas sensors, detect dangerous conditions before they become catastrophic, prompting early preventative actions and substantial risk mitigation.

Natural gas burns more cleanly and efficiently than other carbon fuel sources, prompting a large scale switch for power generation and for propulsion systems. Natural gas is the only fossil fuel whose share is increasing; the International Energy Agency (IEA) forecasts that natural gas share of the world’s energy mix will grow from 21% in 2010 to 25% in 2035.

The most effective way to transport and store natural gas is to liquefy it by cooling it to a cryogenic temperature of approximately -260°F. This condensed liquid form takes up about 1/600th of the volume of gas at a stove burner tip.

There are more than 110 Liquefied Natural Gas (LNG) facilities operating in the U.S.to support the supply to interstate pipeline systems and local distribution companies, international export, storage, and processing into a fuel source. Moreover, LNG is becoming the fuel of choice in the maritime industry; DNV BV estimates that 1800 vessels will be in service by 2020, up from 42 in 2013, with some forecasts putting that number at nearly 10,000.

Methane is the primary component of natural gas and is explosive in concentrations from 5% to 15%.  Emergency Shut-Down systems are required to cease the operations within 1 minute of an LNG leak occurring due to the highly explosive nature of methane, but unfortunately traditional leak detection technologies have some serious shortcomings.

Smell is a standard additive to natural gas to alert personnel to gas leaks, however, since Liquefied Natural Gas is too cold to contain odor-causing chemicals this is not an option for LNG. To make matters worse, the methane sensors mandated to detect LNG leaks only require detection up to the lower explosive gas concentration limit of 5%.  But since LNG is at cryogenic temperatures, a spill quickly becomes highly volatile and can easily saturate an area, rapidly exceeding the detectors sensitivity range.

This is most likely what happened at Statoil’s LNG plant in the Norwegian Arctic on January 5, 2014 where a methane leak went undetected for over 5 minutes and, according to the Petroleum Safety Authority, it could have caused an explosion with dire consequences. As more LNG plants come on line, the probability of similar occurrences will increase.

Fiber optic sensors can significantly reduce risk by identifying the leakage location, accurately detect the methane gas concentration from 0% to 100%, and tracking its movement through the facility.

LNG leaks result in cold spots caused by either the release of cryogenic LNG or the cooling effect of escaping high-pressure gas.  A fiber-optic cable routed alongside or over the LNG tanks and other equipment can be used as a distributed temperature sensor (DTS) monitoring the temperature along its entire length, detecting the presence and precise location of leaks.

When a leak is detected, it is critical to also know the actual concentration of gas in the area, especially when within the explosive range. A remote, distributed fiber optic methane sensing system can accurately detect methane concentrations from 0 to 100% with 0.05% accuracy by using a network of up to 240 sensors connected to a single central control unit with standard telecom grade optical fibers.  The sensors can be up to 20 km from the control unit to track the formation, concentration, and movement of the gas. Detection is by a low power a laser at a wavelength sensitive only to methane, not affected by any other gases or by moisture.  Sensors require no maintenance and are fully passive with no electricity in the cables and at the sensing point, making the system highly dependable and inherently safe even when explosive gas concentrations are present.  This system was originally designed, installed, and tested in underground coal mines, proving its reliability and ruggedness for above and below ground applications.

The risks associated with LNG production, transport, and distribution are real but very manageable with the installation of reliable fiber optic sensing systems to detect, measure, track and eventually predict the conditions leading to a gas leak.  And the IOT will be the pathway for the data to be collected, analyzed, distributed, and acted on to prevent potentially catastrophic losses.

Editor’s Note: For Parts I and II of this series, click on the links below.