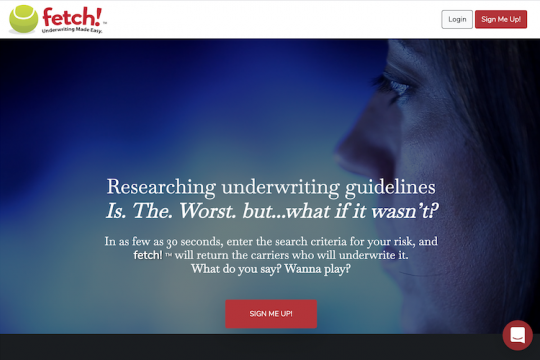 Fetch!, a Clearwater-based insurance distribution-related InsurTech, has announced the debut of its software application, which it describes as taking the tediousness out of researching underwriting guidelines.

Fetch aims to provide an alternative to the historical method used by agents of cross-referencing hundreds of pages of carriers’ guidelines organized in three-ring binders. That approach is time-consuming in itself and also requires further effort to keep up-to-date, and the only alternative has been the creation of large and unwieldy spreadsheets, according to the vendor.

The debut announcement of Fetch! Notes that there are more than 5 billion possible combinations of homeowners insurance variables in Florida and Texas alone.  Fetch! organizes all of the possible combinations of carriers’ printed guidelines and manuals into an instantly searchable database to which the printable guidelines and manuals are still attached and searchable as well, the vendor says.

Results in Under 30 Seconds

Search inquiries within Fetch! Require only four fields and can use 13 advanced searchable criteria. Using these parameters, users can search the billions of possibilities in under 30 seconds to identify the carriers who will underwrite even the most obscure insurance risks, the vendor asserts.

Fetch! President, Trace Meek says that the application was “born out of necessity, as part of his ongoing effort to streamline procedures in his insurance agency.  “I believe the insurance agent of the future will require nothing more than a cell phone in hand,” he says. “Fetch! is on a mission to make that vision a reality by transforming the way insurance agents quote policies, by vastly reducing the amount of time it currently takes to sort through underwriting guidelines.”