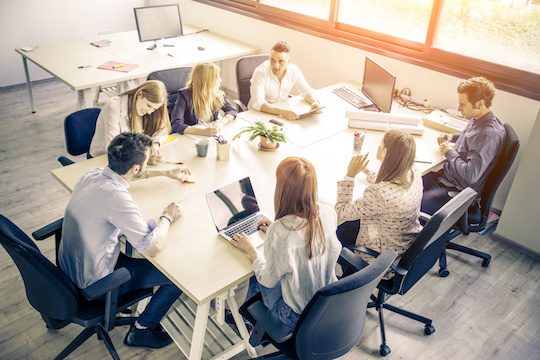 A recent Washington Post article highlighted the importance of meeting face to face for those striving to achieve specific business outcomes. For insurance carriers, many of whom are currently engaged in transformational modernization events that have ambitious goals and notable risks, this is a particularly timely point for consideration.  The whole idea of “face time” does at times seem to be a contrarian theme when considering productivity and expense driven efforts to virtualize as many things as possible. That said, virtualization in and of itself may actually create a range of unexpected consequences which CIOs and other senior IT leaders should be aware of—and plan around—particularly when pursuing high risk/high reward programs.

As technology professionals, CIOs and their teams are focused on delivering the productivity-enhancing capabilities needed by the businesses they support. At the same time, however, they can be evangelists for the idea that for effective communications to take place, beginning with the goal in mind and then selecting the correct tool to produce the results is crucial. The adage that says every problem looks like a nail when the only tool you have is a hammer perfectly describes this situation.

This is not, of course, a suggestion that every meeting become a face-to-face effort. I have seen my share of face-to-face meetings which were ostensibly to share information and build consensus, but which instead supported a remarkably dysfunctional decision-making process that did not move things forward quickly or effectively. Rather, the point is that for issues that are particularly tricky, have significant nuances, or may have notable political overtones, jointly confronting issues in person can move the discussion forward and improve decision-making velocity. This assumes that the right people are in the right place, for the right reason.

The Value of Non-Verbal Communication

Research shows that a surprising level of human communication is nonverbal; while taking away visual cues may lead to faster meetings at a lower cost, these meetings may also produce no tangible results, which can lead organizations astray. As a former CIO, I’m reminded of the times it seemed we didn’t have time during a project to do things right the first time—but we always had time to fix things later, when faced with the starkness of consequences. The same may be said for meeting logistics.

The trick is to thoughtfully consider the goals of a particular session and then apply the appropriate tools to achieve a stated outcome. I have found that the context of information is much deeper and more appropriate when it is shared in person, presuming that this is a prerequisite to achieving the goals of the meeting.

Of course, many exchanges of information do not require this level of contextualization. For example, the simple sharing of results or gathering of information can easily be done in virtual sessions. The key is how those tools get managed. In our work at Novarica, we are able to see the capabilities of the communication technology carriers are deploying in action. In recent years, we’ve noted that many carriers have made significant investments both in meeting places to facilitate Agile teams and in virtualization technology to support groups that may be in different locations. These are terrific capabilities—but the point is understanding how to use the appropriate mechanism for a stated outcome.

Understanding the best way to achieve results when engaging groups of people requires spanning the entire organizational hierarchy. While tech-savvy organizations are frequently focused on virtualization as a means of boosting productivity and enhancing delivery capacity, one of the things we’ve noted on repeated visits to explore innovation in Silicon Valley is the emphasis placed on face time. The people we met at Amazon shared their “two-pizza rule,” which highlights the notion that while in-person connections are critical to innovative collaboration, there is a practical metric for the maximum size of a group. They say that it shouldn’t exceed the number of people who could reasonably split two pizzas for lunch; this concept is exactly what we’ve seen at Fidelity in their Boston innovation center.

When thinking about the selection of the correct tools and forums for meeting engagement, it is also important to factor in the idea that different demographics will consume information in different ways. On a recent visit to a venture capital firm in Silicon Valley, a fascinating conversation about distinctions between the generations emerged. This VC firm views being face to face as the only effective mechanism for communication at a late stage of decisioning when preparing to invest in a company. For one thing, the firm recognizes that in a highly regulated industry like insurance, having a combination of generations is valuable; the battle-tested experience that comes with gray hair can help avoid making unfortunate and expensive mistakes. Watching how generations interact is a key metric the VC uses to make decisions. An eye roll by one generation when another generation is talking is considered a “run away” moment. There’s no way that can be translated through a virtual meeting session.

As in many other cases, the technology acquisition itself turns out to be relatively easy—the complexity comes when combining that tech with both people and process. This is also clearly a case where the proper combination of people and technology is far more effective than either on their own.

The New Normal: Bimodal IT Planning and Staffing