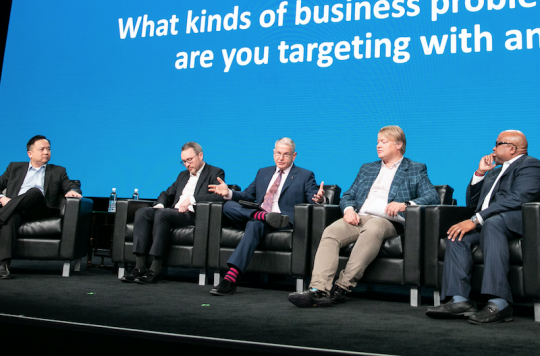 While much of the discussion of insurance innovation has been on distribution and customer experience, insurers have continued to evolve their data and analytics capabilities—which arguably will have a more profound role in industry transformation. How insurers are moving forward in their data and analytics journey was the topic in a Guidewire Connections panel at the Wynn in Las Vegas, moderated by Eugene Lee, VP, Data and Analytics, Guidewire (Foster City, Calif.), and featuring panelists Gareth Hemming, Managing Director, SME, Aviva (London); Al Parisian, CIO, Montana State Fund (MSF, Helena); Dan Trueman, Global Head of Cyber, Axis Insurance (Pembroke, Bermuda); and Michael Kearney, VP and CIO of Claims, The Hartford (Hartford). Lee opened the discussion with a question of the kinds of business problems or use cases the panelists’ companies are targeting with advanced analytics. MSF’s Parisian responded that the workers compensation insurer’s IT department uses structured and unstructured data to support better decision-making in the moment and avoid problems in the aggregate. “We help them to be brilliant in the moment, making much better choices,” he commented. “Claims managers can get a look at the injured employees’ prescriptions, injuries, etc., and compare several hundred similar risks, with the ability to vary the parameters.”

MSF gives business professionals the ability to override the advice generated by predictive models, Parisian added. “We don’t favor a Big Brother or Sister approach; but if outlier decisions are made, we want to understand why and maybe improve our model.”

Axis’ Trueman spoke of his company’s focus on the challenge of cyber risk, which he suggested  the insurance industry hasn’t yet recognized as a permanent issue. “It’s a very unstructured problem, and [the industry] hasn’t underwritten or priced for it,” he commented. Of Axis’ study of the problem in his business unit, he said, “We have defined what an exclusion or lack of an exclusion might look like.”

Aviva has four “buckets” of use cases, according to Hemming, starting with “simplifying from the customer’s point of view, which looks less like a barrage of questions—‘Get a quote, not a quiz,” he quipped. The second area is decision-making for underwriting and claims; the third is determining where to focus efforts through gauging prospects’ propensity to buy; and finally, reserving and predicting loss costs.

“These are very classic, top-down, risk/benefit discussions,” Hemming remarked. “When we find applications for data and analytics we didn’t previously know were there, that’s when it starts to get exciting.” Responding to a question about measuring the success of data/analytics initiatives, The Hartford’s Kearney noted a shift in the company’s thinking about analytics. “Traditionally we spoke of projects that had a beginning and an end, but we need to talk more about products,” he stressed. “ROI is no longer relevant in some cases, and we spend a lot of time with the CFO of claims getting him to talk about what KPIs we’re going to move through the analytics.”

Insurers are generally still early in the journey to find meaningful KPIs, Axis’ Trueman asserted.  “We’re trying to look at efficiency more than anything else,” he commented. “I think that’s how you get those quick wins—and how you break the force field against change.”

Aviva’s Hemming spoke jokingly about the regrettable tendency of “writing generous and at worse fictitious business cases…that’s how you get the money.” He stressed the need to gain more conventional wins, such as improvement in loss ratio, sales metrics, and increased capacity. “The really critical measure is whether people use it or not,” he stressed. “Because whatever you deliver, if your own people won’t use it, there’s no value to it at all.”

As to the question of whether the insurance industry was ahead or behind other verticals, The Hartford’s Kearney said insurance compares unfavorably to other industries, such as retail.

“We’re not there yet, and the sad part is we’re a data rich industry,” he commented. “We’re going to really have to start catching up—we’re not even near banking, probably because touch points are less frequent and I as a customer don’t have the same relationship that I have with my credit card company or bank.”

Insurance’s laggard data/analytics status is a “massive irony,” agreed Aviva’s Hemming. “During the last ten years, we’ve been automating about 60 percent of our SME accounts to straight-through processing,” he noted. “But that means that 40 percent are still too complicated—which doesn’t make sense given what’s been done out there in other industries.” The insular nature of insurance culture doesn’t help, suggested Axis’ Trueman. “We’ve been offering marine insurance for over 300 years and can’t decide whether piracy is a separate peril,” he quipped. “The great use case is how we manage to turn out externally and make the risk better.”

Working with Guidewire company Cycene helped Axis both to look at external risk information and engage with clients about how to cope with exposures, Trueman related. “Cyence gave us really useful information [for example about] the EternalBlue hack; we could look at the vulnerabilities it would exploit, see which clients were most vulnerable and have a conversation with them,” he said. “In fact we ended up having very interesting conversations, and in having them we developed better understanding of both their risk environments and ours—surely the end goal is to improve the relationship.”

In order to establish thriving analytics teams and achieve data-driven culture, insurers might start by changing job descriptions, advised MSF’s Parisian. “As an industry we tend to approach the labor market looking for specific functional expertise,” he said. “We need to change job descriptions and expectations. We need to make a full-throated commitment to iterative digital wizardry and imagination. And we have to recognize that old habits die hard—and we need to make sure that when they die, they don’t take you with them.”

The key word is “culture,” affirmed The Hartford’s Kearny, noting that culture takes time to change. The Hartford has instituted a badging system, similar to the guilds of the Middle Ages, which demonstrate an individual professionals proficiency. However, the most urgent task is to get the right people—data scientists and engineers—and the right thinking into the organization in the first place, he stressed. “How can we get folks in the business to think differently and use data?” he asked. “That will be a challenge in the coming years.”