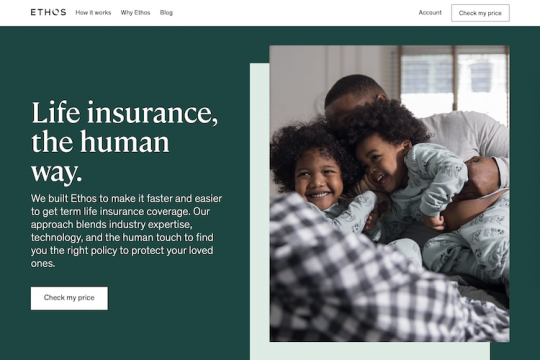 Ethos explains its mission with the assertion that the traditional life insurance application model hasn’t meaningfully evolved in 150 years. “The historical application process is long, complex, and invasive – often requiring medical exams and weeks of paperwork,” a company statement says. “The ubiquitous practice of employing commissioned insurance agents can mean agents are incentivized to make a sale, not to find the policy that is right for the individual. Incentives are fundamentally misaligned. These outdated practices are one reason a massive coverage gap exists in the U.S. Seventy percent of Americans consider life insurance a necessity, yet 41 percent have no coverage at all.”

Ethos says it was founded on the radical idea that everyone deserves access to ethically designed, easy-to-understand term life insurance policies tailored to fit people’s lives. The company reports that it uses predictive analytics and other advanced data technologies to eliminate the traditional barriers keeping people from getting coverage. The result, according to Ethos, is an application process that takes minutes instead of weeks, requiring no medical exams for most applicants, no commissioned agents, and “a life insurance company that prioritizes people over profit.”

“Since our original investment in Ethos last year, we’ve been consistently impressed by the company’s commitment to growth, customer traction, and execution to date,” comments Tyson Clark, General Partner, GV. “With the company’s product differentiation and singular approach to modern life insurance, Ethos is well-positioned to disrupt a $100+ billion industry.” Ethos reports that this latest round of financing comes after significant company growth. The company says that it has quadrupled revenue since October 2018 and announced several integral leadership hires, including Head of Finance David Zhang and VP of Insurance Phil Murphy. The company says that it is also driving increased customer acquisition, insuring thousands of new families. The Series C funding will directed at building continued momentum, supporting product refinement, technical team hires, and ultimately, the ability to protect more families, Ethos says.

“Getting life insurance is one of the most selfless financial choices someone can make,” comments Peter Colis, CEO and Co-Founder, Ethos. “You shouldn’t have to endure what’s essentially a medical and financial strip search in order to protect your family. What makes Ethos different from other providers is our core values are aligned with the expectations of American families: life insurance should be easy and ethical. We aren’t motivated by capitalizing on individuals. Instead, we make choices like right-sizing policies for customers, so they have the best coverage for their families without ever paying more than they should.”