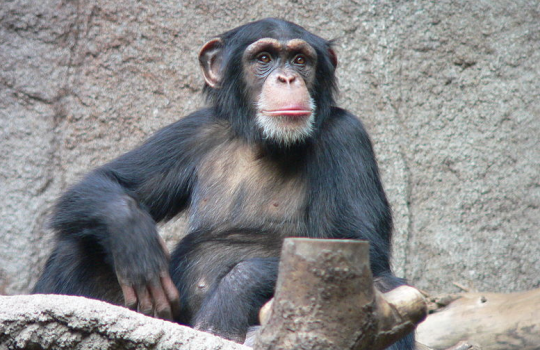 The University of Cambridge’s Emeritus Royal Society Research Professor, Robert Aubrey Hinde, Ph.D. is one of the foremost experts on chimpanzee behavior and has devoted his entire career to his field.  One such famous experiment he conducted in the 1970s, the so-called “Banana Fools” experiment, is as relevant today as it was back then.

A basket of bananas was placed on a platform in reach at the top of a ladder, and Dr. Hinde sent one chimp up the ladder at a time to fetch a banana.  Once the chimp reached the platform, where the bananas where placed and were easily within reach, the chimp was sprayed with water from a power hose, thus causing the chimp to retreat down the ladder in frustration.  A second chimp was then sent up the ladder, and the chimp who previously retreated tried desperately in vain to discourage the banana-hungry second chimp from making the climb for fear of him being sprayed too.  The second chimp did in fact make it up to the platform, but only to be sprayed until he too retreated.

A separate pair of chimps observed the goings on involving the first pair of chimps in search of the awaiting fruit and were both set free to climb the ladder themselves.  Interestingly, not one single chimp in the second set had a desire to climb the ladder.  They saw what had happened to their counterparts moments ago and simply cared not to subject themselves to the inevitable.

In many ways – though certainly not in every way – Dr. Hinde’s landmark experiment in learned behavior is emblematic of today’s insurance universe from an innovation perspective.  If the industry is to remain relevant it must decouple from its legacy groupthink mentality and embrace the concept known as FOMO, better known as “fear of missing out.”

How many times have you found yourself on vacation unable to relax because you felt compelled to constantly check your business and/or personal e-mail, or even your Facebook or Twitter newsfeeds?  According to various studies, alarmingly, that describes nearly 60 percent of us.  But what exactly is FOMO?

Simply put, FOMO is characterized as a fearful attitude towards the possibility  of failing to exhaust available opportunities and missing the expected joy associated with succeeding in doing so.  But that’s half the story.  The second half is much more notable: It’s the concentration of attention to the empty half of the glass.

The insurance industry has much to think about today, from cyber risk to climate change, from statutory compliance to distribution, from supply chain to global market expansion, and at the center of all this is something the industry has been grappling with for decades: innovation.  Innovation should never be considered a “one-off” project; it must be embedded in an organization as a “business as usual” mindset.  Today’s competitive breakneck pace lends itself to innovation perhaps more than ever in history, as  successful organizations rely on a constant evaluation (and reevaluation) of creativity and make it their business to make innovation everyone’s  business.

Pressure on the Industry Despite recent significant advances in technology specific to the global insurance industry, the mantra “innovate or die” is a constant reminder of what could happen if ancillary industries pass it by.  Today’s reality is that the onset of market newcomers from other more dynamic industries have put even greater pressure on the insurance industry today, and to many, that raises the question of market relevancy.  Can the industry remain relevant despite relatively modest advances in innovation in the last decade or so?  In light of the increasing pressure to remain relevant and leverage technological advances as it should, how can the industry embed a mindset of innovation, change and progressive thinking into its culture, while at the same time, productively instill a sense of FOMO into the equation without fear of recrimination?

FOMO isn’t always a bad thing.  In fact, according to Dr. Fred Luthans, Professor of Industrial Psychology at Columbia University, instilling a productive and positive sense of FOMO within an organization is what differentiates great organizations from good ones.  Productively channeling the “fear” in FOMO can serve as powerful incentive to industry stakeholders to break away from legacy tactics.

The Need for Experimentation

To many, there’s no room for failure in the insurance industry.  That’s a problem that hasn’t gone away.  If there’s ever a way to cultivate innovation, the industry must be willing to allow those at their trade to experiment and try new things, just as virtually every other industry does.  The harsh reality is that there are no soothsayers, and it is unknown what will work and what won’t.  However, if organizations encourage experimentation all along the insurance value chain and take incremental steps in the event certain experiments don’t pan out, all the while being incented to adopt a productive sense of FOMO, they haven’t risked much in terms of time or other valuable resources.  In fact, they may even be surprised at the results.

As an industry veteran, it’s discouraging to hear stories involving staff not questioning why certain processes or procedures are performed the way they have been.  Today, companies can’t afford to respond by saying something to the effect that that’s the way it has always been done.  At the time the function or process was created, there may have been worthwhile reasons that they were done a certain way, but those reasons may not apply anymore.  And by the same token, there could be just as many valid reasons to justify change.

Innovation in insurance has long been rightly married to a certain conservatism that ensures that companies do not get carried away by the latest fads, but preserve their capital for its intended purpose. That conservatism served most carriers well during the 2008 financial crisis, but have hindered the flexibility needed to survive and thrive in a post-crisis environment.  The rate of change has vastly accelerated, and to the industry’s credit, some of that change has been borne by the industry itself, but certainly not all change.  Other change was borne by other industries interested in entering the insurance marketplace, and rest assured, those same industries are not bound by legacy thinking.

FOMO as a positive change agent has served other industries well; there’s no legitimate reason to believe that it can’t have the same effect on the insurance industry too.