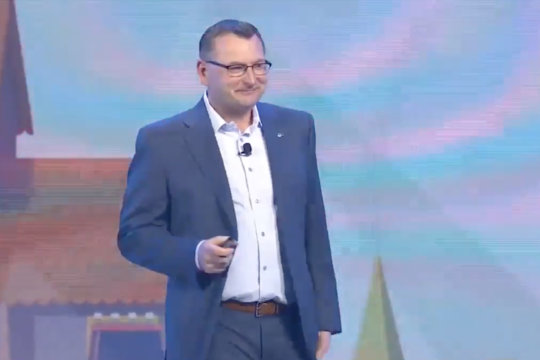 (Mike Jackowski on stage at Formation 2022.)

Cloud is accelerating innovation across the insurance industry, and that accelerated innovation is driving remarkable outcomes, said Mike Jackowski, CEO, Duck Creek, in the introductory remarks of his keynote address at the vendor’s Formation 2022 user group meeting in Orlando, Fla., on Monday, March 7. Jackowski’s remarks were part of the conference’s initial general session, titled The New Standard in P&C and General Insurance.

Jackowski spoke about the mission of insurance and how rewarding it is to participate in the industry, recalling how a leader he worked for referred to insurance as, “the oxygen of free enterprise.” He then addressed current challenges shaping the insurance market. In the wake of the pandemic, he noted, inflation has risen, commerce is suffering from supply chain problems, car parts and replacement vehicles are more expensive, the cost of medical care is going up, and global warming is a growing issue.

“We have CATs [natural catastrophes] on the rise, and as if that’s not enough, we have this heartbreaking aggression happening in Ukraine,” Jackowski continued. “It’s going to affect millsions of lives, it’s going to affect businesses.”

Importantly for his audience, he stressed, the crisis would affect insurance. “We have currency instability, and reinsurance capacity is going to get revisited,” he said. “And then look at what it’s doing to cyber [risk].” 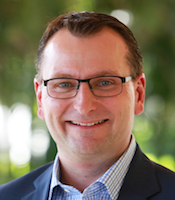 These trends will continue to add pressure on insurers’ costs and will require companies to study them minutely in order to better understand how to make changes to products and rates, Jackowski stressed. “Adverse selection is a real thing in our industry, so first-movers who now how to react are going to be rewarded, and the last-movers will be penalized,” he elaborated. “It’s the old adage—if I’m in the woods with a bear, I don’t have to outrun the bear, I just need to outrun you!”

Insisting that he didn’t wish to bring a pessimistic message, Jackowski expressed gratitude to be in a part of an industry that has remained strong. “So many of my colleagues in other industries were hit hard, and I think insurance has weathered the storm—as it always has,” he said.

With that said, Jackowski conceded that the pandemic had been a “rollercoaster ride.” He cited the effect of lockdowns resulting in miles driven dropping by 20 percent, resulting in the unprecedented event of insurers refunding $10 billion in premium to policyholders. Despite the effect of fewer miles driven on frequency of losses, driving behavior resulted in an increase of 25 percent on severity. Severity is being pushed even higher by supply chain issues, Jackowski related. He noted a similar phenomenon in workers’ compensation, where premiums decreased but claims fid not. “Now every work comp carrier is trying to figure out this balance, and what they need to do to go forward,” he commented.

Jackowski observed that there is a hardening market in professional liability, adding that companies who take a more “surgical” approach to rates will do better than those who take more of a spray-and-pray approach. Unlike other forms of criminal activity, cybercrime has been increasing dramatically since 2020, getting a further boost in the aftermath of the the Ukraine crisis, according to Jackowski. Cybercriminals are using new tools and techniques, creating a huge problem for businesses, individuals and society in general, he said, adding that therein lies a huge opportunity.

“That’s why we just formed a partnership with Cyber Cube that we announced last week, and we’re trying to bring these cool partners to help you solve these problems in capitalize on these opportunities,” Jackowski commented.